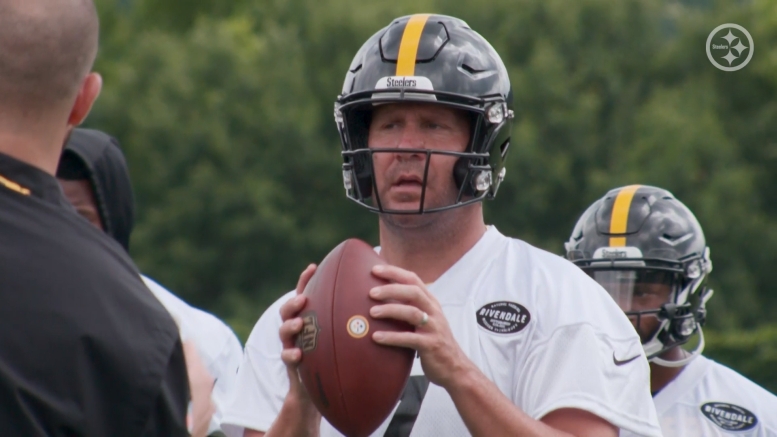 The Pittsburgh Steelers will have a largely new set of weapons for Ben Roethlisberger at wide receiver. Even if that includes some players who were already on the field a bit last season, those being Ryan Switzer and James Washington, neither have a lot of history with him or have had much of an impact to date in the NFL.

The only players on the roster at wide receiver to whom he has thrown more than a couple of handfuls of passes are JuJu Smith-Schuster going into his third season, and Eli Rogers. Donte Moncrief is a veteran, but was only brought in as a free agent. Washington is a second-year guy, Switzer came in during training camp in 2018, and Diontae Johnson is a rookie. Any other fringe candidate outside of Johnny Holton has no NFL experience.

None of that dampens Roethlisberger’s enthusiasm for the upcoming season or for the young and emerging group. Recently, he talked with Chris Simms following practice for an interview, and late in the discussion, he asked Big Ben to break down his receivers.

JuJu just keeps getting better. So I’m excited for what he’s gonna do, especially with the new challenge. Every year he’s been presented with a new challenge, and he’s answered the bell, so I’d like to see what he’s gonna do. I’m excited to see what Moncrief’s gonna do. I’ve been really excited about him. We’ve had a great battle going on inside with Eli and Switz, two guys that are really fun to watch work. James Washington, I think, has really shown some [growth]. He’s lost weight, he’s gotten faster, making plays. So there’s gonna be a lot. There’s a lot of catches that went to Oakland that are gonna have to get dispersed amongst a lot of guys. Not one guy. That’s gonna be the thing. It’s not one guy that needs to pick up the slack. It needs to be everybody, and that includes me, making sure that each guy gets the ball and don’t try to do too much.

I think it’s interesting that Roethlisberger specifically mentioned the importance of his own role in making sure that as many players are involved in the game as possible. He is coming off a season in which he allowed two targets to receive over 160 passes apiece in their direction in Smith-Schuster and Antonio Brown.

The latter is gone, of course, and that is what he alluded to with the reference to Oakland. Smith-Schuster will get his catches, but Brown’s 170-some-odd targets won’t just be redirected one way. It’s his intention to get that ball moving around more than perhaps we have ever seen in his career, a task that he places upon himself.