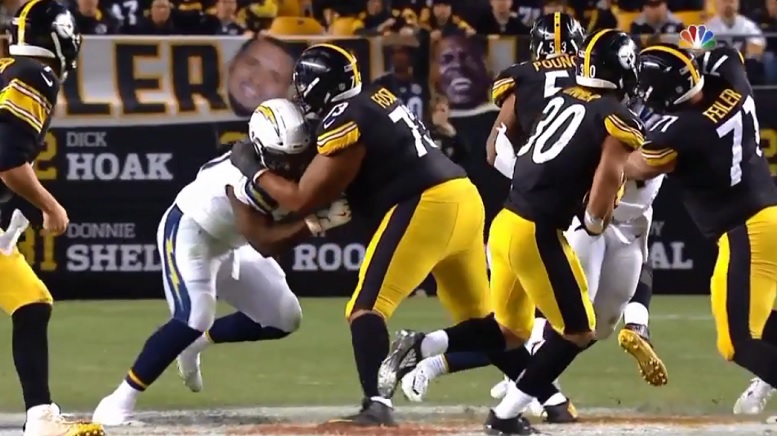 The 2019 NFL preseason got underway Thursday night with the annual Hall of Fame game and now 64 more exhibition games will follow over the course of the next four weeks. During these next four weeks it will certainly be interesting to watch the officiating and especially when it comes to new rule changes and points of emphasis.

While offensive and defensive pass interference penalties now being challengeable is certainly one key rule change that will be worth monitoring closely throughout the rest of the preseason, there are plenty of other of rules and penalties that are also expected to be heavily emphasized over the course of the next month so that teams will know what to expect during the regular season.

According to the NFL, back side holding, or holds away from the play, will be a point of emphasis for officials this year. NFL officials were at the Pittsburgh Steelers training camp practices this week to brief players, coaches and media members on the league’s new rules and points of emphasis for 2019. On Friday, Ray Fittipaldo of the Pittsburgh Post-Gazette had a tweet about the back side holding, or holds away from plays that will be emphasized this season, along with a reference to one particular play from last season that can be used to illustrate what the league now wants to prevent.

Back side holding, or holds away from the play, are a point of emphasis NFL officials this year. One example fans will remember from last year: Ramon Foster’s hold on the nose on a long James Conner run vs LA. That call changed the game. Now it’s going to be called all the time.

Fittipaldo referenced the controversial holding call on Steelers guard Ramon Foster last season in the the third quarter of the team’s home game against the Los Angeles Chargers. That holding call on Foster negated a 22-yard run to the Chargers 26-yard-line by running back James Conner. After the 10-yard penalty on Foster was assessed, the Steelers offense stalled and the team punted the football back to the Chargers, who then drove the length of the field for a touchdown.

In case you forgot about that holding call play against the Chargers, you can see it below:

Below is what the league says the officials will now be looking for when it comes to greater emphasis being put on this kind of holding call:

Offensive holding will be more strictly enforced this season, particularly on the back side of the run play or line of scrimmage. Referees will closely monitor play at the line of scrimmage to ensure that offensive players do not materially restrict opponents or alter the defender’s path or angle of pursuit.

Material restrictions include but are not limited to: