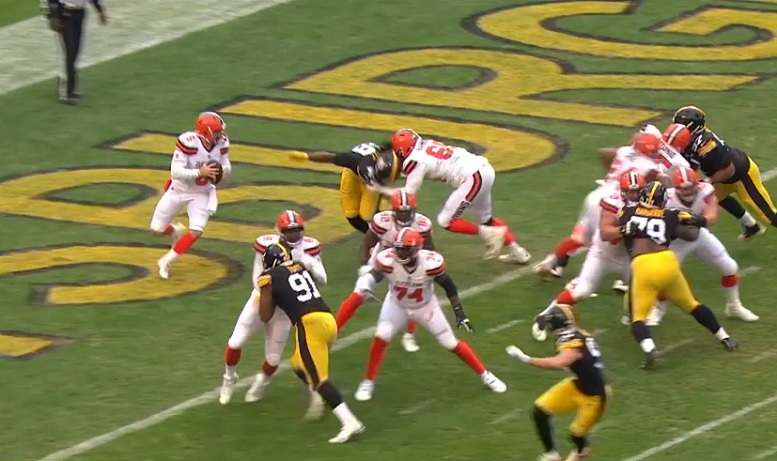 It seems as though the Pittsburgh Steelers are the only team in the AFC North right now who have their starting offensive line set—at least ostensibly. It does seem pretty clear at this point that Matt Feiler will emerge as their right tackle. The other three teams in the AFC North are all trying to figure out who will start at one of their guard positions.

For the Cincinnati Bengals, it’s the left guard spot, which was supposed to go to Cordy Glenn before Jonah Williams was injured, pushing him back to left tackle. They signed veteran John Jerry, but rookie Michael Jordan is also taking a lot of first-team reps, and veteran Trey Hopkins is also in the mix. The latter even spent some time working at center with the first-team group over 2018 first-round pick Billy Price just to give it a look.

Then there are the Cleveland Browns, who are working on figuring out who to use to replace Kevin Zeitler, the veteran Pro Bowl guard whom they traded to the New York Giants in exchange for Olivier Vernon.

The frontrunner appears to be second-year second-round pick Austin Corbett, but rookie Eric Kush has also been pushing for the job. It initially even seemed as though the latter was taking over the job, but Corbett has played better in the past week. Joel Bitonio, their All-Pro left guard, recently said that the second-year man is on the right track toward landing the job.

Finally, the Baltimore Ravens are also trying to settle in on a left guard, but they have at least decided upon whom that will not be, as they traded Alex Lewis, their former starter at the position, to the New York Jets in exchange for a fifth-round pick.

Like the two other teams, there is a rookie in the mix, and in their case, it is Ben Powers, a mid-round selection who grew up a Steelers fan. He is competing against veteran James Hurst, who has played and started up and down the line over the years. Third-year Jermaine Eluemenor has gotten a lot of work with the first-team group as well.

As for the Steelers, the competition is not technically over, and Chukwuma Okorafor could potentially still play his way into the job, but it would take some doing. The team has been giving Feiler a good amount of work at guard as well with David DeCastro ailing and Ramon Foster getting days off, so that has given the second-year man additional opportunities to work with the starters.

Of the four teams, the Steelers certainly have the most comfortable position, but the Ravens are in very solid shape as well after recently settling down their tackle positions. The Browns’ line has some stability and potential as well, particularly if Greg Robinson can settle down at the left tackle spot.