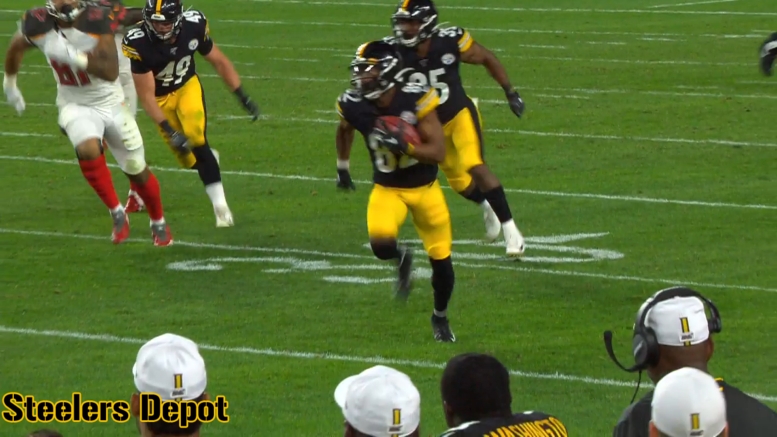 I’m not actively trying to be a buzzkill with two down evaluations in a row after a commanding road win in the tune-up preseason game, but we’re really starting to get a clearer picture here. The Steelers used Ryan Switzer as their return man for the entirety of the first half, true to Mike Tomlin’s words last week that Diontae Spencer hasn’t earned a move up in the pecking order.

Spencer did play all of the second half as the return man, but he really didn’t have anything to work with. On his first return, a punt, he fielded it at the 30, ran about 20 yards east and west, and was tackled at the 31. That, basically, is an encapsulation of a return man’s tribulations in trying to make a 53-man roster in today’s NFL.

And once again, Spencer was a non-factor in the passing game. Not because he didn’t play, but because he wasn’t targeted. For the second week in a row, he did have an impressive run on an end-around, this one even going for 29 yards, but you’re not going to make a roster on end-arounds as a wide receiver.

And he hasn’t done enough as a returner to make the team over a more experienced, more trusted, and more comfortable player playing the position as Switzer, whom the team already views as returner-capable. Most of his struggles in that department boil down to unfamiliarity with the unit, having been brought in so late, and poor blocking. There’s reason to believe he can have more success doing it in 2019.

Now, if I were making the decisions, I would allow Spencer to return every kick and punt and line up deep for field goals to see if he can make anything happen. If he’s actually able to break one (and not be chased out of bounds by the punter again), maybe we can revisit this conversation on Thursday night.

For now, and speaking as somebody who had him on my post-Chiefs roster prediction, his chances of making the team are so slim right now following a Titans game that didn’t advance his cause at all.