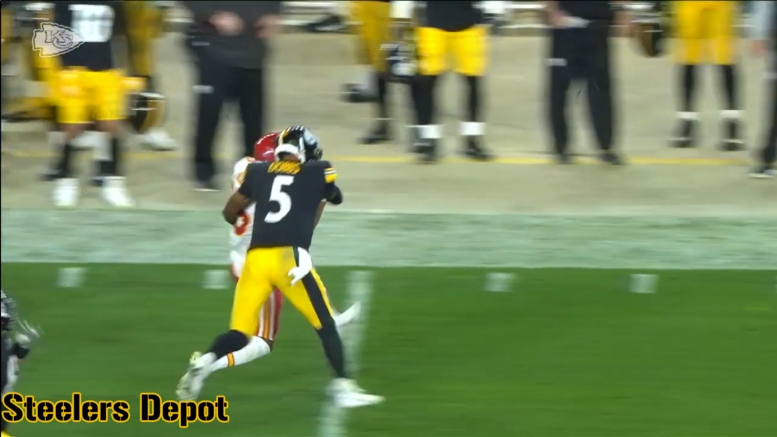 I know there will be a few people out here outraged about this stock watch, but the bottom line is that Joshua Dobbs was given the opportunity to execute the two-minute drill, and he didn’t pass muster. Then he was gifted a second opportunity and threw an interception. A backup quarterback has got to be able to perform in those situations.

There hasn’t been a lot about Dobbs that has changed since last year. Perhaps his ability to make some big plays has become a big more consistent, but the rest of his profile is the same. He makes some plays with his legs (he had an excellent third-down conversion in which he spun out of two sacks). And then he misses the easy throws.

He finished the game completing six of 11 passes for 95 yards, 40 of which came on a deep ball to James Washington his first play in the game. He also connected on a deep play to Eli Rogers for 25 yards—but he threw an interception going wide for Diontae Johnson in the end zone on the next play.

It looked like he would connect on another deep ball, this one a touchdown for Johnson, but the officials ruled that Johnson had pushed off, triggering an offensive pass interference penalty. Mike Tomlin challenged it, but the call stood. Dobbs’ throw, assuming it was intended to go back-shoulder at least, was a good one with the cornerback’s back to the ball, where only the receiver could catch it.

And then he missed the easy throws, which are ultimately going to kill him. It was a similar struggle that Landry Jones had earlier on in his career, and which his critics still shot him down for even though he had improved in that area when he was the primary backup in 2016 and 2017.

Dobbs’ own performance is not the only reason his stock is down, though. It’s also because Rudolph performed well for the second straight game—although I still want to see him make more aggressive throws—and so did Devlin Hodges.

If Hodges can keep showing up at the end of games, maybe even get some earlier reps in the final preseason game, he could make a legitimate case for making the roster, which would mean, barring the unlikely, Dobbs getting traded or released.