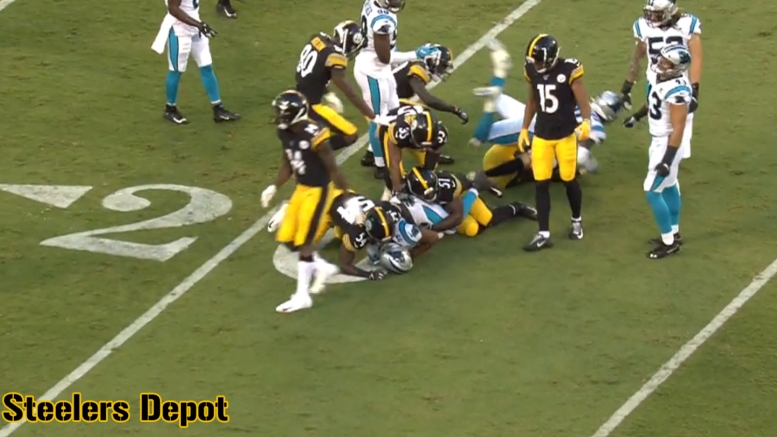 Let’s just go with the obvious. In all likelihood, Tuzar Skipper is going to be the most talked-about man in Pittsburgh until Saturday when the decision as to whether or not he makes the roster must be made. And if he doesn’t, then he’s going to continue to be talked about. Either for another day if he makes the practice squad, or for the rest of eternity for some Steelers fans if he gets claimed off waivers.

Skipper led the entire NFL with five sacks this preseason, the most by any player (tied) since at least 2006, the furthest back NFL.com tracks preseason statistics. As far as we know, it’s the most a Steelers player has ever recorded in the preseason. I believe the second-most known is Olasunkanmi Adeniyi and Arthur Moats, both of who had three, in 2018 and 2017, respectively.

Regardless of his participation level on special teams, that is going to make him hard to cut, and he did play some on kick coverage units last night, recording a pair of tackles. While he didn’t get a lot of work on special teams, his quality of play when in that role will be weighed in his favor when the roster cuts are made.

Really, those two tackles are more significant for him than the two sacks that he had last night, one of which produced his second forced fumble of the preseason. He has not only gotten after the passer well, he has also played well against the run, showing the ability to hold the edge.

Still, the numbers will be tough. There are at least five complete stone-cold locks at linebacker, those being T.J. Watt, Bud Dupree, Mark Barron, Vince Williams, and Devin Bush. Then there are the two veterans and core special teamers, Tyler Matakevich and Anthony Chickillo. Add Olasunkanmi Adeniyi, who is nursing an injury, and rookie Ulysees Gilbert III, who also had an impressive preseason and has been both active and productive on special teams, and you have nine on a roster that is already very crowded.

Whether he makes the team or not, though, Skipper has played well enough to be on an NFL roster, and it would be disappointing if the Steelers can’t find a way to make the numbers work. They gave him his shot on special teams and as far as I’m concerned, he passed.