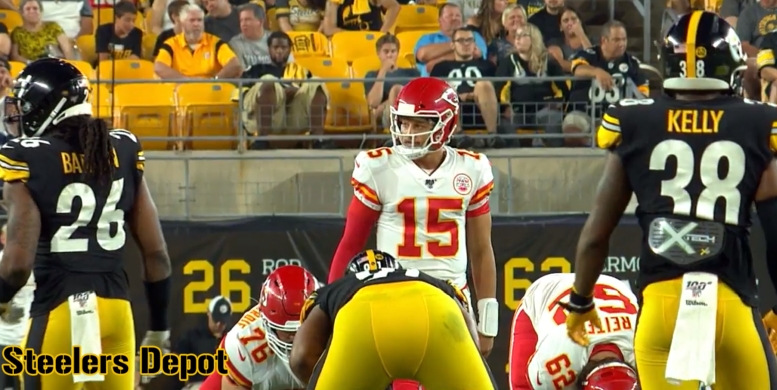 Question: Game Edition – How will the starting defense (minus Joe Haden) look against the Tennessee Titans?

Overall, the Steelers defense has played well through the first two games of the preseason, though take that for whatever it’s worth, and it still wouldn’t be much. It was nice to hold Patrick Mahomes to minimal production, sure, but we already know what he did last year.

The Titans will actually have a game plan and should play their starters for a while. The Steelers gameplanned themselves this week and ran a simulated game week. That’s the accepted premise of the third preseason game.

As I wrote about yesterday, one of the key questions entering the game is how Devin Bush handles the communication role for a long stretch of time. He’ll be asked to interpret more complex calls than he had to in the first preseason game, I’m sure.

The defense was pretty aggressive last week early in the game with cornerback blitzes and things of that nature. They didn’t hesitate to introduce a new sub-package with Kameron Kelly on the field. How long of a look will that receive this time?

The Steelers invested a lot in the defense this offseason, including Steven Nelson at cornerback. He was hardly tested at all in their second preseason game. I’d like to see him faced with some adversity in Tennessee to get a better feel for him.

Another thing I’d like to see is some young players worked into the first-team unit if possible. Tuzar Skipper and Ulysees Gilbert III, specifically. It would be good to get that opportunity to see it in game action, and should be a key part of the evaluation process as they trim the roster to 53.