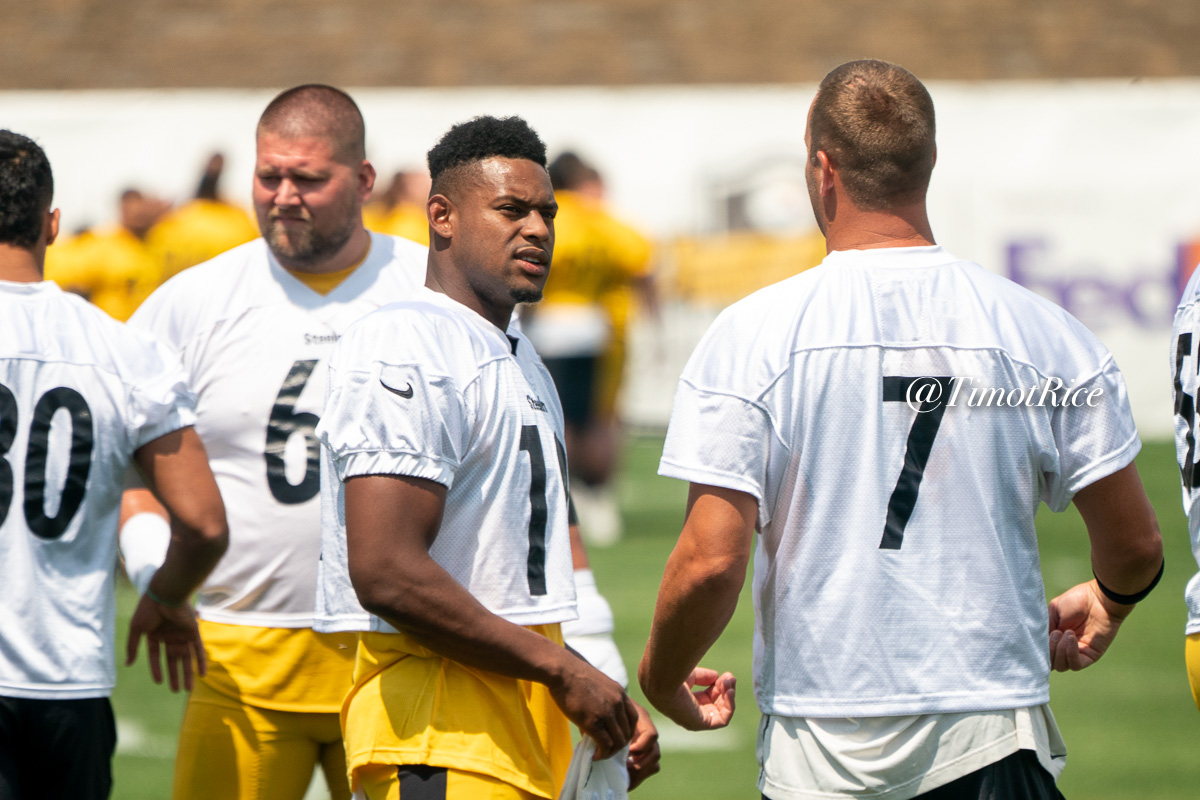 The footballs are inflated. The uniforms cleaned and the jugs machine tuned to a steady hum. The fields are trimmed to perfect blades of grass, because there are no fake plastic trees at Saint Vincent College in Latrobe, Pennsylvania.

It’s camp time, baby, and everything is in its right place for the latest edition of the Pittsburgh Steelers.

With Antonio Brown having demonstrated the art of how to disappear completely the Karma police in the form of his former teammates and most of Steelers Nation are anxious to demonstrate how wrong he was for behaving so badly.

Lest we not forget, Le’Veon Bell also left Pittsburgh high and dry meaning his next visit to Steeltown will be in a position of the tourist.

There, there Steelers Nation, no sense daydreaming about what coulda and what shoulda, these house of cards dealt by General Manager Kevin Colbert, perhaps for his last time in Pittsburgh, are what we have to play this season.

This stark reality has many climbing up the walls, while others are courageously optimistic, touting this as the season the Steelers finally show off their once perennial championship form.

How can you be sure?

You can’t. Nobody can.

But, that won’t keep the Spin from dropping major season spoilers so there will be no surprises.

This year brings on the release of Coach Mike Tomlin 3.0. The much celebrated launch edition came in his rookie year as head coach with the Steelers when he not only was the league’s camp sensation, but he set the standard of coaching hires to come.

Yet, this youthful exuberance benefited greatly from a veteran locker room of stars assembled by The Chin before him.

After a few years, following the draining of that vaunted veteran locker room, Tomlin 2.0 meant he was firmly in charge. It was a clean boot of the system. This period boasted a stellar regular season record, but the persistent bug in the machine was too much fizzle and too little sizzle when it came to the playoffs.

Which brings us to Tomlin 3.0. No rockstars. No drama queens. Just plain old football. Will it work?

It should. And it better. An uncustomary one year contract extension for Tomlin signals Art Rooney Jr. isn’t going to hang around for Tomlin 4.0.

The Drama Is The Absence Of Drama

Not too long ago, in a galaxy not too far away, the Steelers were making headlines with tell-all radio shows, rap stardom, failed drug tests, helicopter entrances and dancing hippos.

Now the new drama is no drama.

These Steelers are back to the classics. No…not the 70’s Steelers, those guys were a riot, an on and off the field madhouse despite how Terry Bradshaw wants to revision history. With some of the preaching he’s done to Antonio Brown, I think the “Original TB” is mistaking himself with Roger Staubach.

This year it’s back to the classics. We’re talking ol’ school football, with leather helmets, Knute Rockne speeches. Team hugs. No “I’s” in team. And all that stuff.

The new drama is no drama.

Everyone is looking for someone…else…to be the first to crack.

Hey…in any professional football team, it’s only for a short time when the offensive linemen are allowed to dictate what happens in the locker room.

Somebody gonna break soon. Who shall it be? The dramatic tension is palpable.

Enemy Number One for Steelers Nation is the man who is blamed…well…for everything last year.

Could have what? Scored a lot less touchdowns?

Those in the “addition by subtraction” school of mathematics are going to learn rather quickly a simple physics lesson of what happens when an elite talent that can draw three defenders is suddenly erased from the playbook.

Can it be overcome? It can…and it must…or we’re going to re-witness those early Roethlisberger days when he double, triple and quadruple clutched waiting for receivers to get open.

What is most shocking about last year’s response to Antonio’s…admittedly shameful actions at times…was that people found it shocking.

Folks. It’s been stated in the Spin on many an occasion that when it comes to receivers:

Which is exactly why I put my hand to my forehead when the entire league started to pronounce AB the best in the league, perhaps the greatest of all time.

It was over. Gaskets were going to start breaching. And they did. Especially when Roethlisberger reminded Brown of QB 101…which means the rock starts and stops with him.

Only delusional fans believe all NFL wide receivers should act like Heath Miller, who after touchdowns would merely hand the pigskin to the referee and say, “Thank you sir for allowing me to borrow your football.”

The only superstar receivers in Pittsburgh who didn’t suffer from a bad case of Diva-itis were maybe John Stallworth and Louis Lipps.

As for my favorite of all time…Lynn Swann…goodness, the man left football to be the next Mikhail Baryshnikov. And, that was only before he did something even more limelight-desperate, and that was getting into politics.

Perhaps most intriguing is those who are declaring JuJu Smith-Schuster to somehow be the anti-Antonio, a young, bicycle riding man of simple, humble desires.

Heck…JuJu is MILES ahead of Brown’s journey into Divaland at similar points in their careers. Oh my…wait until rookie contracts expire.

JuJu may end up being the greatest entertainer and crowd stopper the Steelers have ever seen. In many ways, I hope so. We love a good show.

Well…actually, for those of us who have aged like fine wine following the Steelers for decades we aren’t as flabbergasted at the prospect of the Cleveland Browns winning the division as the younger fans may be. For many seasons, the Browns provided the Black and Gold with elite competition and in many ways a renewed rivalry should be welcomed.

Greeted warmly or not, the Browns long, long drought appears to be over as that level of talent cannot be denied.

Most disturbing for those of us who were happier with the Browns resting in peace is it finally appears their long, tragically lost search for a franchise quarterback has reached its end. Baker Mayfield is the real deal and with targets like Odell Beckham Jr. and Jarvis Landry these Browns games are no longer dates on the calendars where “W’s” can be written in months in advance.

The Steelers According To Ben Roethlisberger

With all of the backlash from AB’s attack on his former main man, most of Steelers Nation raced to back up Big Ben as his leadership creds were being questioned across the league.

Somewhere through this well-meaning process of defending him, Roethlisberger was elevated by some Steelers fans to a leadership prowess that portrayed him as a blend of George Washington, Nelson Mandela and Douglas MacArthur.

C’mon people. Ben does have many superpowers, often on dramatic display on the field, but serving as the unquestioned leader of the ENTIRE team was never really his forte. He always was a bit…well awkward in the role.

But as a behind-the-scenes, chief diplomat…my word…he has excelled. He has a contract that could handsomely pay more than half of the team, he chose the offensive coordinator, and most certainly has a leather desk in the front office.

More than anyone, this is Ben Roethlisberger’s team. The blank canvas and the bright paints for this season are firmly in the artist’s hands.

Will this be a Rembrandt of a season at last this year? Or just another paint-splattered disappointment? It’s up to Number 7.

Yet, the National Football League is ultimately a cruel, time-lapsing world of continual seasons of change. As Big Ben is clearly in the sunset of his career, a new sun is rising. Out with the old, in with the new.

It’s just the way it is in the big leagues.

When the Steelers uncharacteristically jumped up to secure Devin Bush with the 10th overall pick of this year’s NFL draft, it signaled the team was done with its decade long foray of being an offensive minded team.

Nothing will be more significant to team history this year than if the Steelers win their seventh Super Bowl. But, short of this, the real story of the 2019 season will be the return to preeminence of the defense in the locker room and on the field.

The age of Mike Wallace, Antonio Brown, Martavis Bryant and Le’Veon Bell is in the rear view mirror. That experiment failed.

The coup d’état of the team by the defense won’t be fully realized this year. But, it will certainly be by sometime next year. That’s where the Steelers future stars are all aligning.

Cue the exit music. A new dawn is coming to Pittsburgh.