Came across an interesting study conducted by Bryce Rossler for his SIS Blog. He broke down all 32 teams “reactionary” playcalling. That is, how often they pass or ran after big plays, positive or negative. It’s an idea created by Bill Walsh decades ago, refined and explored here.

Courtesy of Rossler, here’s how the Steelers stack up. The lines in each column represent league average. 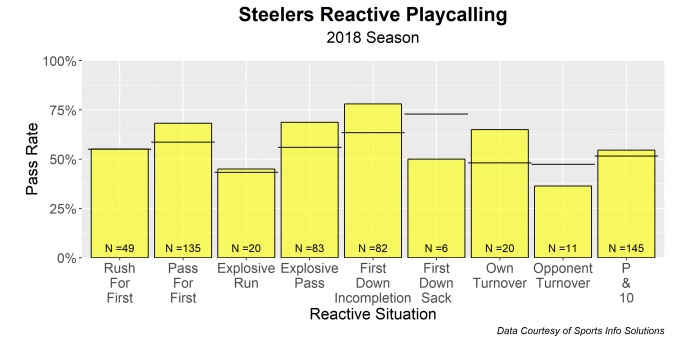 Overall, the numbers aren’t too surprising. The Steelers passed the ball more than anyone else last season with their 689 attempts being 45 more than second place.

There’s just two categories where the Steelers run more than the average. After a first down sack and an opponent turnover. Both are a little disappointing to see, especially sacks, which all but assures a 3rd and long. Here are the Steelers’ third down distances after those runs.

But as you can tell, and one issue with this study, is the sample size. Ben Roethlisberger was sacked just seven times on first down, one of the lowest marks in the league (the 7th unaccounted for in the study resulted in a fumble and turnover against Cleveland). So one more decision to pass instead of run, and QBs can change playcalls of course, greatly skew the numbers. Ditto with the “opponent turnover” part of the chart, the second fewest sample size with just 11 instances.

Overall, the idea here is that passing is always more effective and looking at things through that scope, even if the point is debatable, the Steelers come out looking good. With a franchise, eventual Hall of Fame quarterback, and the weapons at Roethlisberger’s disposal, it’s no surprise to see them throw as much as they do.