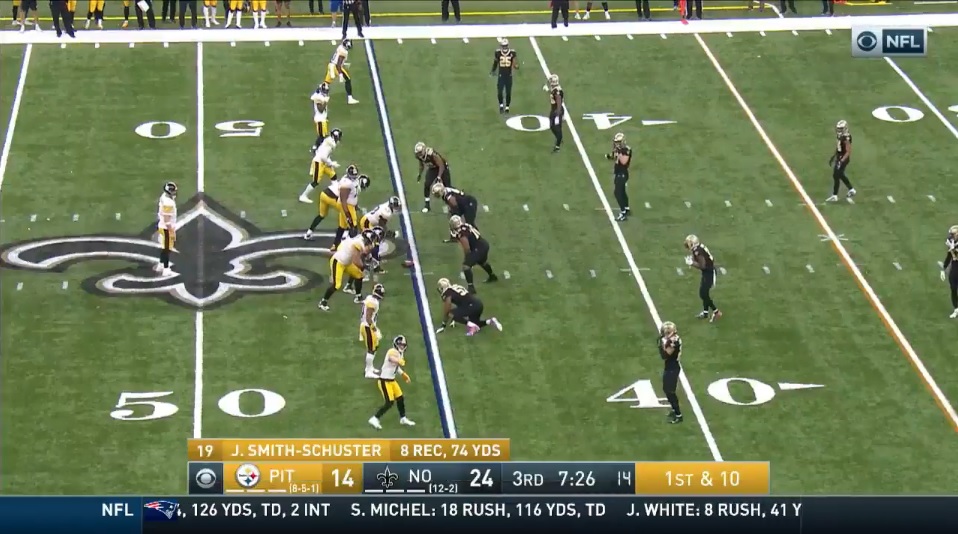 Preseason. Week 3. Vance McDonald stretches out for a Ben Roethlisberger pass over the middle and boom, lands awkwardly on his right shoulder. Broken collarbone, out six weeks.

What do the Pittsburgh Steelers do?

Out of desperation, do they overpay and trade for one? Roll with Xavier Grimble and *gulp* Zach Gentry? Your Yinzer Uncle donate his collarbone to McDonald?

There’s a better option (especially that third one). Just don’t use a tight end. For Pittsburgh, that won’t be a brand new concept.

37 times last season, with 36 of those coming over the final three weeks of the season (i.e. when Eli Rogers returned and up to speed), the team used either four or five receivers on the field. Around the league, it’s an uncommon approach even as much as we throw the phrase “five wide” out into the football world. Most times, there’s a receiver or tight end split out wide to try to create a plus matchup. Not the case at the end of the year.

Pittsburgh simply took advantage of the glut of talent they had at receiver. It was, and in a way, still is, their deepest position. Make no mistake, a worse group without Antonio Brown but there will be difficult decisions made at that spot. And given the investment made on the players who will be on the team, drafting James Washington and Diontae Johnson the last two years while adding Donte Moncrief in free agency, there’s every incentive to get them on the field and contributing to the offense.

Most importantly, it was successful too. Here are the passing stats in those personnel groupings (00 or 10).

The focus, with a lower yards per attempt, was on the quick game. Get the ball out hot, without a tight end and most often, no running back, that makes sense, and let your receivers make plays in space. Spread defenses out, defend vertically and horizontally, and force bad matchups. No team has five corners to put on the field to cover everyone.

This angle screen to Antonio Brown aligned in the slot. Runs underneath his blockers for an easy 17 yards. Can do the same with most receivers still on the roster but especially guys like Ryan Swizter and Diontae Johnson.

Check out this concept. Bunch to the top. Creates free release for Eli Rogers who runs a good dig route and makes the catch in front of the flat-footed corner.

And finally, another from the Pats game. Man beater again. Switch vertical to get the matchup, create inside leverage for Brown, and Roethlisberger hits him down the seam for the touchdown.

To be clear, this isn’t an idea to be used exclusively should McDonald hurt, though you can bet that’s one of the first things they should turn to if it happens. Even when healthy, McDonald is unlikely to play more than 55-60% of the snaps, the same number he registered last year after removing the opener he sat out.

And when you have the talent and depth at the position like the Steelers do at receiver, with a Hall of Fame QB chucking it to them, you find ways to get them all involved. Force defenses to prepare for something relatively uncommon and test units that may only have one or two great pieces in the secondary but not great depth. Just another look for this offense to give in a year where they’ll have to be more creative than recent seasons to make up for the pieces they lost.