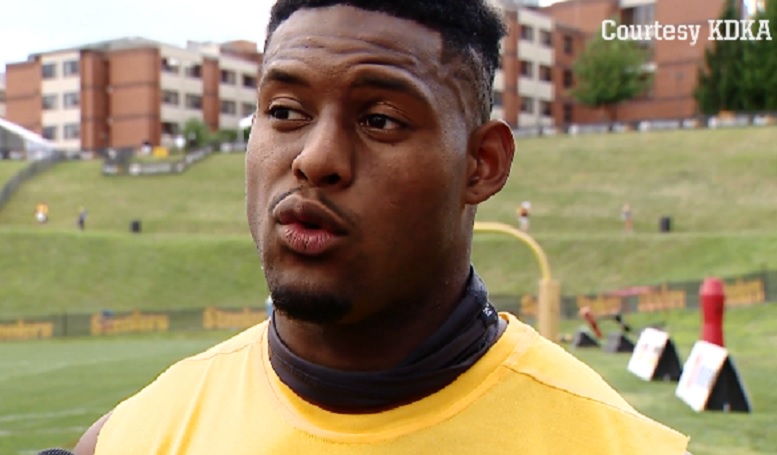 Even though he’s certainly not shy about being in front of a camera, Pittsburgh Steelers wide receiver JuJu Smith-Schuster did a great job of avoiding them all on Thursday when he arrived at Saint Vincent College in Latrobe for the start of the team’s annual training camp. In short, and despite him teasing on social media that he might make a grand training camp entrance on Thursday. Smith-Schuster used his ninja-like skills to sneak into the dorms of Saint Vincent College without many people noticing.

After the Steelers first training camp practice of 2019 on Friday, Smith-Schuster finally addressed the media and he was immediately asked about his very ultra low-key entrance this year.

“I mean, there’s nothing really to it,” Smith-Schuster said. “I mean, some guys are different. More so, you know, I’m just here to work, you know, and just win games and win the Super Bowl. And that’s the main focus, you know, to focus on our team and work together.”

.@TeamJuJu speaks about the team's new mindset, leading by example, spreading the ball around and more. pic.twitter.com/tezDaXnqKr

So, was it indeed a conscious effort on Smith-Schuster’s part to sneak into this year’s training camp mostly unnoticed a year after wide receiver Antonio Brown made the grandest of Latrobe player entrances ever by arriving in a helicopter?

“I mean, everybody made a big deal about, like, coming in a certain way,” Smith-Schuster said. “I can really care less on how you come in. Because at the end of the day, how you come in, that’s just you, personally. More so, just for myself, it was just like, I’m coming into work. I don’t really need all the Paparazzi’s and the people taking pictures.”

With Brown and his diva-ness being shipped off to the Oakland Raiders back in March, the Steelers really seem to have become more of a team this past offseason. At the very least, there seems to be a whole lot less offseason drama that previews offseasons. On Friday, Smith-Schuster was asked after camp practice if he senses there being something different with this year’s team upon camp arrival than the previous two years.

“Oh, most definitely, man,” Smith-Schuster said. “You see everyone’s on the same page and everyone, I mean, we started practice 10 minutes early and like that’s unusual for us to do that. But, you know, no one is late and everyone’s like 10, 15 minutes early on a field. Like, we were all in it for the same reasons. And you just see our mindset with the team is very positive.”

While only in his third NFL season, Smith-Schuster is already perceived to be the leader of the Steelers wide receiver room even though he’s the youngest of the group. On Friday, he was asked if he feels like a veteran leader now.

“Yeah, there’s times where I feel I’m still a kid and I have my times where I play around,” Smith-Schuster said. “But, you know, I’ll say a couple words here and there, but at the end of the day, you know, I try to show by, you know, play on the field and just showing, you know, how to make plays in ball.”

Smith-Schuster certainly did that on-the-field leading on the field during Fridays camp practice. Additionally, after the session was over, he was back to his youthful self and reportedly stayed late to sign quite a few autographs and even take part in a gender reveal for one young couple.

It’s obvious that Smith-Schuster knows that there is a time and place for everything and Thursday wasn’t the time for him to arrive at Saint Vincent College in grand-style with all cameras focused on him. They’ll be enough cameras on him from this point forward and hopefully they are mostly documenting what it is that he does best, having innocent fun with teammates and fans and catching a lot of passes and scoring touchdowns.

“No, JuJu came here to work and it’s not about me,” Smith-Schuster said on Friday. “It’s about the team.”