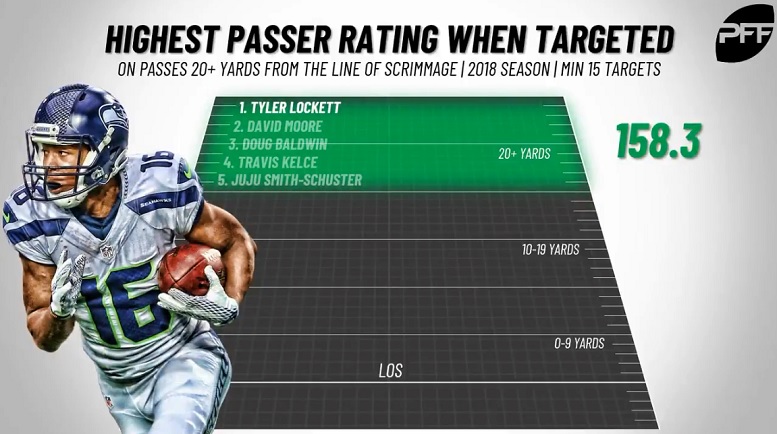 Pittsburgh Steelers wide receiver JuJu Smith-Schuster had a great second season in the NFL in 2018 as evidenced by his 111 receptions for 1,426 yards and 7 touchdowns. However, what a lot people might not know is that Smith-Schuster’s stellar 2018 season also included him not being too bad of a down the field target.

According to Pro Football Focus, Smith-Schuster registered the fifth-highest target passer rating last season on passes thrown 20 or more yards down the field. Ahead of him on the list were Tyler Lockett, David Moore, Doug Baldwin and Travis Kelce.

In case you’re curious, Smith-Schuster was targeted 20 times on passes that flew 20 or more yards past the line of scrimmage last season and he caught 8 of those for 366 yards with 2 touchdowns and an interception. That stat line equates to a target passer rating of 104.2.

Below are several of those catches 8 deep catches Smith-Schuster had last season.

Also in case your’re curious, last season former wide receiver Antonio Brown was targeted 35 times 20 or more yards down the field and he caught 12 of those passes for 450 yards and 8 touchdowns and 3 interceptions. That equates to a target passer rating of 100.9.

Steelers quarterback Ben Roethlisberger, by the way, was 24 of 78 on his 20 yard or longer throws last season for 999 yards with 11 touchdowns and 3 interceptions for a passer rating of 103.37.

JuJu out of the slot #Steelers pic.twitter.com/1q5BSMjGs8

Where does THIS JuJu catch and run from 2018 rank overall from last season? #Steelers pic.twitter.com/pm1SZnWX6s