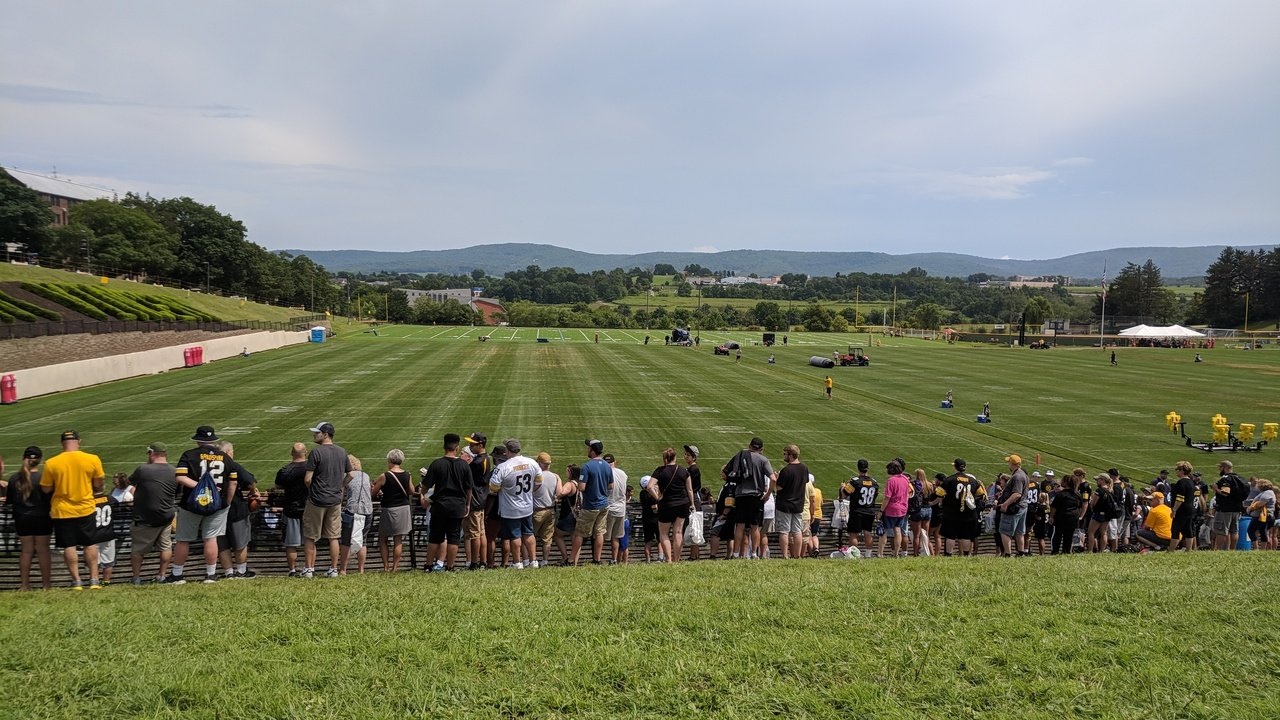 Two weeks from today the Pittsburgh Steelers will report to Saint Vincent College in Latrobe for their annual training camp and hopefully these next 14 days fly off the calendar quickly. Ahead of this year’s Steelers training camp report date, I have put together several things fans of the team should start being on the lookout for on that Thursday.

Grand Arrivals – It’s hard for me to remember the last Steelers training camp that didn’t include a reporting day that featured one or more grand entrances. We’ve seen it all for several years now as players have arrived at the dorms on Saint Vincent College in all sorts of different ways. We’ve seen arrivals in heavy construction equipment, tiny cars, expensive cars, and even a helicopter just last year. For the first time in a long time, it would be nice to see the Steelers arrive for the start of their annual training camp without a player trying to draw extra attention his way. Personally, I’d much rather see a grand exit via a parade in Pittsburgh in early February than I would a grand entrance in late July at Latrobe.

Conditioning Test/Active PUP List – On the surface, the Steelers appear to be a very, very healthy team with just weeks remaining before the start of their annual training camp. In fact, if I had to guess right now, tackle Jerald Hawkins is potentially the only player likely to be placed on the Active PUP list at the start of training camp as he still wasn’t fully back to 100 percent during the offseason practices following him suffering a torn quad a little more than a year ago. However, we have seen a few surprises in the past when it comes to players needing to start off training camp on the Active PUP list. Prior to the announcement of any potential Active PUP list additions, the Steelers will have their annual conditioning test not long after they have put their belongings away in their dorm rooms. Will all players forced to participate in that test pass? We’ll know fairly quickly if any don’t. Personally, I can’t remember the last time the Steelers opened a training camp with an empty Active PUP list.

Mike Tomlin Press Conference – Not long after the Steelers conduct their annual conditioning test, head coach Mike Tomlin will hold his first official training camp press conference of 2019. Will we learn a lot from Tomlin’s first presser? We’ll see. Regardless, we’ll make sure to pass along every little piece of pertinent information that Tomlin provides during his first press conference of the team’s 2019 training camp on the site.

Player Restructure/Extension Watch Begins – It will be a huge surprise if the Steelers don’t sign any players to contract extensions between the start of training camp and the start of the 2019 regular season. As previously mentioned in posts on this site, players such as cornerback Joe Haden, defensive tackle Javon Hargrave, safety Sean Davis, cornerback Mike Hilton and center/guard B.J. Finney are all potential summer contract extension candidates. However, not all of them are likely to get new deals just the same. Barring any transactions taking place over the course of the next two weeks, the Steelers will open their 2019 training camp with just $984,968 in available salary cap space. Because of that amount being so low, we could see at least one contract restructure take place not long after the team arrives in Latrobe. Defensive lineman Cameron Heyward is a perfect candidate for a restructure should the team decide to go the route of summer salary cap massaging.

Contract Extension Watch For Tomlin & Colbert Begins – While it might not happen on arrival day, late July through late August is the most likely time that contract extensions for Tomlin and general manager Kevin Colbert might be announced if they’re to happen this summer. Tomlin’s last contract extension was announced on Aug. 4, 2017 and speculation has been heavy this offseason that he’ll sign another extension not long after the team reports to Latrobe for the start of this year’s training camp. As for Colbert, whose current contract that he signed late in August of 2017, reportedly expires after the 2020 NFL Draft takes place. In short, expect him to also sign a new contract before the start of the 2019 regular season if Tomlin signs a new deal soon.

First Practice – One day after arriving for the start of training camp the Steelers will hold their first practice at Chuck Noll Field. That practice, along with the one on Saturday, will both be unpadded sessions.

First Padded Practice – The Steelers first 2019 training camp practice in pads is currently scheduled to take place on Sunday, As usual, our very own Alex Kozora plans on being present for every Steelers training camp practice that is open to the public this year and he’ll be filing daily reports on what all he observes later each evening. Many of those reports will be quickly followed by special training camp episodes if The Terrible Podcast.