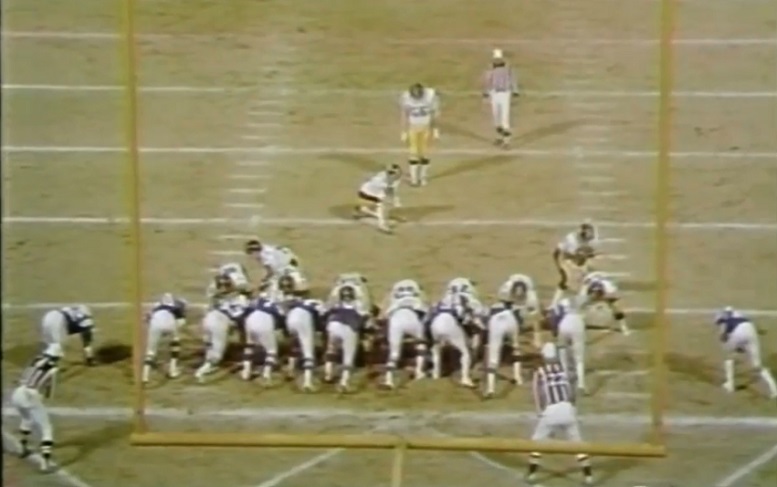 While a lot of fans of the Pittsburgh Steelers have likely heard of former offensive lineman Ray Mansfield before, there’s probably not too many of them that know that he had to kick more than once for the black and gold during the 1976 playoffs.

Thanks to a groin/gland/calf injury that Steelers regular kicker Roy Gerela was dealing with ahead of the Steelers 1976 Divisional Round playoff game against the Baltimore Colts, Mansfield, who at that point of his 14 year NFL career was the backup center behind Mike Webster, was asked to kick a fourth quarter extra-point following a 10-yard rushing touchdown by Reggie Harrison with a little less than 8 minutes remaining in the blowout contest.

During the television broadcast of the Steelers game against the Colts, the two announcers discussed Gerela’s injury after he missed the first extra-point attempt of the game. You can watch that part of the broadcast below.

While Gerela would go on to make two field goals and three extra-points during the rest of the playoff game against the Colts, punter Bobby Walden handled the kickoffs to lessen the burden on the Steelers injured kicker. However, with the game out of reach in the fourth quarter, Steelers head coach Chuck Noll decided to let Mansfield attempt the extra-point after Harrison scored his touchdown. You can see that made extra-point by Mansfield in two different videos and how his Steelers teammates and coaches reacted.

After the game was over, Mansfield let it be known that he had done some limited kicking many years prior during his college career. In fact, it was reported at the time that Mansfield had told the media that in addition to kicking a 35-yard field goal as a college sophomore at Washington, he had also kicked the game-winning extra point in the 1963 Coaches All-America Game.

“Cancel that retirement talk,” Mansfield said after the game was over. “Let’s talk about a new contract. I’m going to become the George Blanda of the offensive line.”

Curiously enough, Mansfield and the Steelers faced George Blanda‘s former team, the Oakland Raiders, the following week in the AFC Championship Game. Additionally, Mansfield kicked yet another extra-point in that game as well as Gerela was unable to kick. That 24-7 loss to the Raiders, however, would wind up being Mansfield’s final game of his long NFL career as the longtime Steelers center nicknamed The Ranger ultimately announced his retirement in July of 1977.

Mansfield, who later passed away on November 3, 1996 at the age of 55, was originally drafted in the second-round of the 1963 NFL draft by the Philadelphia Eagles out of Washington. After one season with the eagles he was traded to the Steelers in 1964 in exchange for cash. After initially playing some at defensive tackle for the Steelers, Mansfield moved permanently to center. During his 13 year NFL career in Pittsburgh he never missed a game and thus played in 182 consecutive contests. He still holds the Steelers team record for the most consecutive games played.