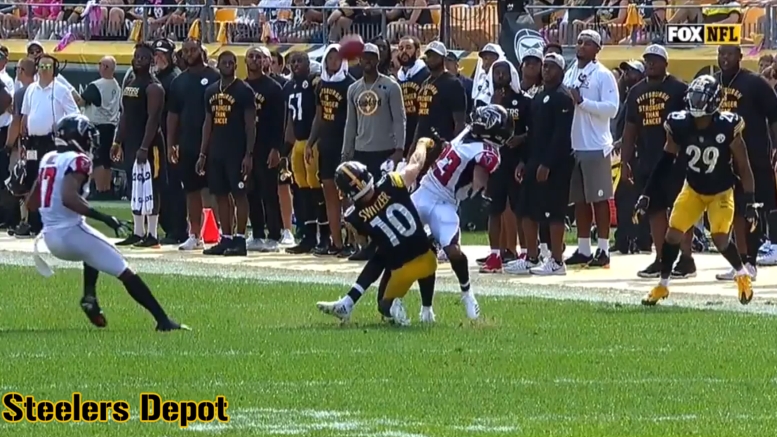 I may or may not have caused a little bit of Twitter beef yesterday. My article regarding the emphasis on special teams was retweeted by DeAngelo Williams, the former Pittsburgh Steelers running back, who posed the question of whether or not the Steelers keep Ryan Switzer.

So do keep or get rid of Switzer? https://t.co/M2Fa14fXCC

It may shock you to find out that Switzer did not exactly love that comment, for multiple reasons. For one, it insinuates that he is a ‘special teams player’ (in fact, he recorded the third-most receptions for the third-most yards among wide receivers last season). For another, it lays the burden of the return game’s struggles on the returner.

We know these are Switzer’s thoughts because he shared them, as shown in the Tweets below:

Because the entire special teams unit falls on me, of course.

Switzer, who has trained with Williams in the offseason in the past, even though they were never with the Steelers at the same time (he did play at North Carolina while Williams was with the Panthers), does have a point.

Our own Alex Kozora has already shown that, while the kick return unit was very disappointing last season, the vast majority of the failings could be chalked up to the poor execution of the blocking scheme rather than anything having directly to do with the returner.

With that said, while he played a fairly big role in the receiving game in 2018 as the season evolved, it’s not immediately clear that he will do so in 2019. Even in the absence of Antonio Brown, the top three at the position figures to be established as JuJu Smith-Schuster, James Washington, and Donte Moncrief.

Beyond that, they have added Diontae Johnson through the draft early in the third round, a player that they appear to be very high on, which should be an indication that they would like to try to get him on the field quickly. In addition to Johnson, there is the returning Eli Rogers, who bears a lot of similarities to Switzer in the receiving game, and saw more snaps than the latter after he returned late in the year from a torn ACL.

One thing that can be said for sure is that Switzer is doing everything he can to put himself in the best position to keep his place on the roster in 2019. If you’ve seen any of his workout posts, he is surprisingly ripped for a guy his size. Slot receivers tend to go down easily, but with his background, and his increased strength, he could give himself a boost in terms of yards after the catch ability if he can shake some tackles.

In the end, it seems that Switzer’s real issue with Williams’ post is because he felt that Williams was somebody who should have understood how his question would be received. The wide receiver said that they had gotten close over the past couple of offseasons through their training, and that he had opened up about how much of a struggle his first two seasons had been.

No, you weren’t. We’ve spent the last couple of off season training together& we’ve gotten close. I’ve opened up to you about how hard my journey has been. For you to ask the question if I should even be on the team was out of pocket. Especially for someone I trusted.

Switzer even said earlier this offseason that leaving the game behind was very much in his mind after he was traded for a second time. But he genuinely seems to love being in Pittsburgh, and has also been doing a lot of work in the community, particularly in the children’s hospital. He’s hoping this is going to be his home, so for a friend to even open that up for questioning—from a post that didn’t even mention Switzer, I want to add—I guess I can understand the reaction.