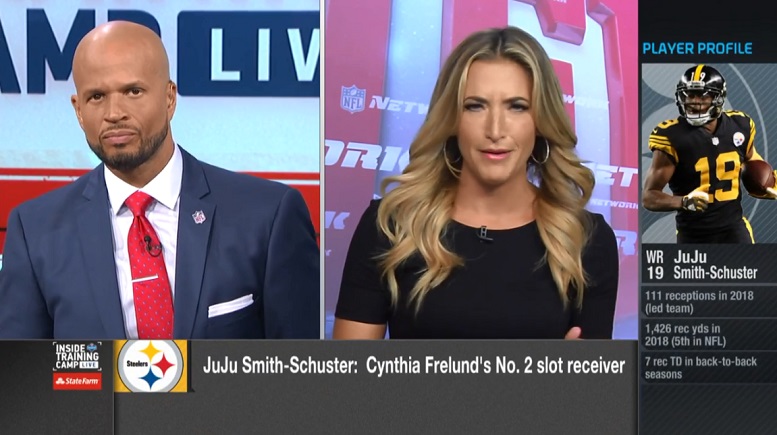 As a result of the Pittsburgh Steelers trading away wide receiver Antonio Brown to the Oakland Raiders during the offseason, several are now concerned about the overall production of wide receiver JuJu Smith-Schuster possibly falling off in 2019. Many believe that with Smith-Schuster now essentially being the Steelers new number-one wide receiver in Pittsburgh it will lead to him getting a lot more attention from opposing defenses and thus a drop off in his overall stats. Cynthia Frelund, an analytics expert for the NFL Network, however, made it clear this week that she’s not worried about Brown’s offseason exodus from Pittsburgh impacting Smith-Schuster’s ability to produce in 2019.

“Listen, I think there’s been some controversy here over whether JuJu can step up or not, but my model settles it right here, we don’t even need to play the season. JuJu Smith-Schuster is going to be a big deal,” Frelund said recently During an NFL Network appearance. “He’s going to have, again, another great year of yards after the catch. Last season he led all wide receivers with almost 650, which is a ton. He’s big, he’s physical, he knocks people out of his way. He’s going to still play in the slot. So for me, this one’s all about continued success from the slot for JuJu Smith Schuster, number seven for my PPR wide receiver projections.”

Frelund is right to point out that Smith-Schuster will likely once again playing a large amount of offensive snaps in the slot in 2019 as a main reason to not be so concerned about a potential drop off in his receiving stats this upcoming season even with Brown being gone. Him working out the slot predominately will make him a lot tougher to scheme against for entire games, despite not having Brown on the field with him. Like last season, he’s likely to have quite a bit of yards after the catch in 2019 as well.

According to stats published by Pro Football Focus, Smith-Schuster’s 30 2018 receptions that gained 15 yards or more from the slot were the second-most among wide receivers since 2017. Additionally 63 of his 111 total receptions in 2018 came from the slot. PFF also has Smith-Schuster down as registering 21 contested catches last season and 384 deep receiving yards. If that’s not enough positive from the 2018 season as far as Smith-Schuster is concerned, he and quarterback Ben Roethlisberger combined for a 79.5% catchable target percentage in 2018 and that stat tied for the fourth-highest in the NFL, per PFF.

His 30 receptions of 15+ yards from the slot are second-most among WRs since 2017. pic.twitter.com/Taj7GuEFua

A look back at the 2018 season for JuJu Smith-Schuster shows that he is ready to take over as the top option for the #Steelers if called upon.

Big Ben to JuJu best WR-QB tandem in the league?

The combo combined for a 79.5% Catchable Target Percentage – tied for the 4th highest in the NFL in 2018.

Next step in 2019 as JuJu becomes the WR1 in Pittsburgh?https://t.co/bUbRt8UM6W pic.twitter.com/1aeNgFHyYQ

It goes without saying that Frelund is high on Smith-Schuster ahead of the start of the 2019 season. In fact, she even currently has him ranked as her number-two slot wide receiver in the NFL for 2019 behind only Kansas City Chiefs wide receiver Tyreek Hill. Below are her extended thoughts on why the Steelers new wide receiver is ranked that high and why she expects him to have another fantastic season in 2019.

“Well, I think this pretty much gives away which side of the debate my model comes down on regarding Smith-Schuster’s impact without Antonio Brown on the field. Last season, Smith-Schuster was one of only six total receivers to see over 400 snaps aligned in the slot. (Pro Football Focus counts 421 total snaps out of the slot, tied for fourth-most in the NFL, which was good for 61.5 percent of his snaps.) My model predicts him to be used on the outside more, but I still project between 56 percent and 60 percent of his snaps will come from the slot, based on his success in 2018. Smith-Schuster undoubtedly benefited from playing with Brown last season, but the seven-time Pro Bowler (who was traded to Oakland this offseason) also benefited from playing with Smith-Schuster, who earned 648 yards after the catch in 2018, most among receivers. Here’s some more context: Using computer vision, I tracked how often opposing defenders entered a “halo” 6-feet in diameter around each receiver last season, and Smith-Schuster faced pressure (defenders in his halo) at the seventh-highest rate. In other words, while Smith-Schuster will undoubtedly face an adjustment this season, there are some key indicators that he will continue to have a top-level impact, like his ability to earn tough yards after the catch and withstand an already significant amount of defensive attention, even when Brown was still on his team. Fantasy-wise, Smith-Schuster is my No. 7 projected wideout (in PPR formats).”