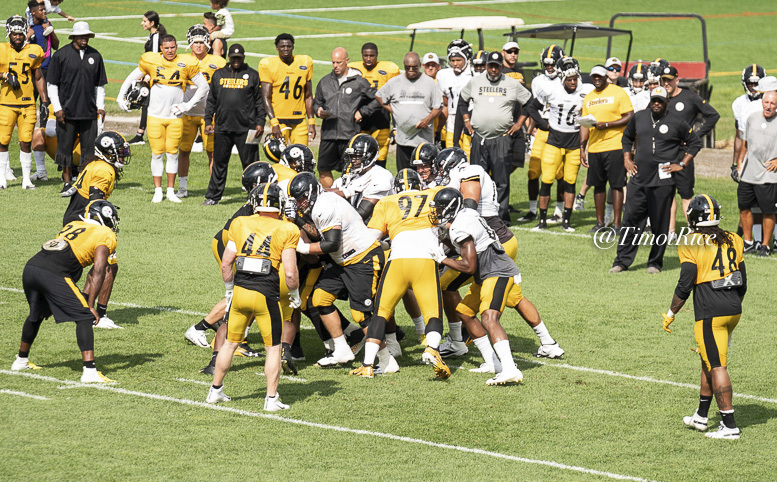 I’m not sure how much it helps but it certainly can’t hurt for the Pittsburgh Steelers to be considered the underdogs. And for the first time in awhile, some in the national media are considering them a sleeper. Not a favorite. Still, Bucky Brooks seems optimistic about the team’s chances in 2019. He listed the Steelers as one of five sleeper teams in a recent article for NFL.com.

Here’s is part of what he wrote about Pittsburgh’s chances. You can read the full blurb at the link here.

“Mike Tomlin might trot out a team possessing less talent than he did last season, but I’m on record as a believer that he will get better results with a more cohesive unit in the locker room…With Ben Roethlisberger motivated to prove his greatness by uplifting an offense that is short on brand names on the perimeter, the Steelers could get his best effort as a player and leader this season. On defense, the addition of first-round pick Devin Bush gives the unit the dynamic weapon it’s been missing since Ryan Shazier suffered a spinal injury in December 2017…If the defense comes together and holds its own against some of the premier aerial attacks in the AFC, the Steelers could finally realize their potential as title contenders.”

It’s of little question stamping out the locker room drama will provide a benefit. The question is if it outweighs the talent lost, most notably Antonio Brown. And the reality is it probably doesn’t. But that doesn’t mean the talent is completely gone. The Steelers are returning Pro Bowlers at running back and wide receiver, James Conner and JuJu Smith-Schuster, in addition to high hopes from second-year wideout James Washington while Vance McDonald could have a career year at tight end.

The defense has received upgrades too with the additions of CB Steven Nelson and ILBs Mark Barron and Devin Bush. If they can create more turnovers, that side of the ball will be a complimentary piece to the offense. 25 is the magic number of takeaways they need, something 17 of the last 18 Super Bowl winners have accomplished. But you know all that already.

The interesting element is the framing from the national media. Cleveland has gone all the attention this offseason. Some of it is justified. They had arguably the best past few months of anyone in the NFL. But Pittsburgh and Baltimore are the teams who have been there, done that, and the Browns aren’t going to be handed anything, even if they’re a tough out. It’s going to be fun to watch, especially late in the season when the Steelers play most of their division matchups towards the end of the year.

Pittsburgh was just one of two AFC teams on Brooks’ list. The Jacksonville Jaguars were the other.