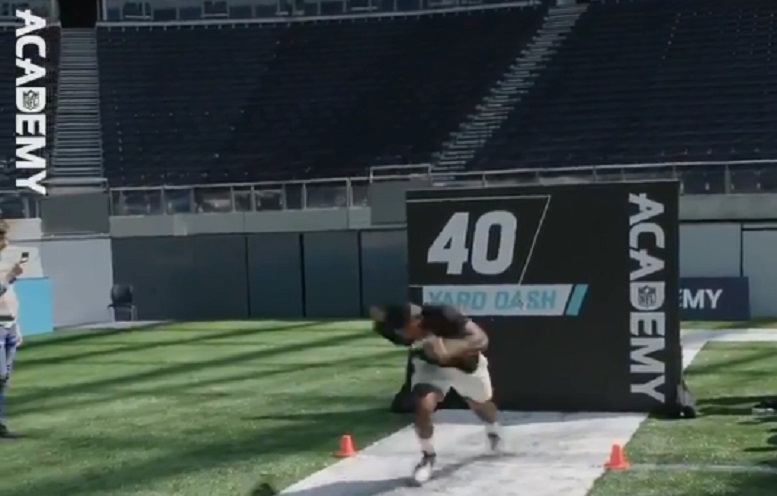 Pittsburgh Steelers wide receiver JuJu Smith-Schuster is one of a few NFL players currently in London to help with the launch of the NFL Academy, a youth football program designed to get UK teenagers aged 16-18 more involved in playing the game. That trip includes the Steelers wide receiver spending quite a bit of time at the new Tottenham Hotspur Stadium in North London and on Tuesday the third-year wide receiver even re-ran the 40-yard-dash there and apparently his time was just as lit as he is in England this week.

“I feel happy,” Smith-Schuster said on Monday when asked how he feels about his latest 40-yard-dash time. “I ran faster than my last 40. They need to go ahead and replace this 40 with my old one. I like that.”

So, what does Smith-Schuster think about London so far? Well, he has seen Big Ben already.

“Yes, it’s my first trip to the UK, and yes I saw Big Ben, but it’s under construction,” Smith-Schuster said Tuesday afternoon per a media conference call, per the PPG. “I’m going to take a picture of it and send it to Ben.”

Smith-Schuster also doesn’t appear to be a fan of some of the London Cuisine so far.

“The fish and chips are not good,” he said. “I had a good steak. The bakery goods are good, the croissants and stuff. And the English breakfasts, they’re fire. They’re so good.”

As expected, Smith-Schuster is a hit this week in London and it certainly sounds like he’s having a blast being an ambassador for the NFL as well.

“Being here mentoring the young dudes is awesome,” said Smith-Schuster, according to steelers.com. “They are super excited to learn the game. They get the technique down. They execute it. They are really good listeners. They dominate in what they do. It’s exciting to see them out here doing a lot of work.”