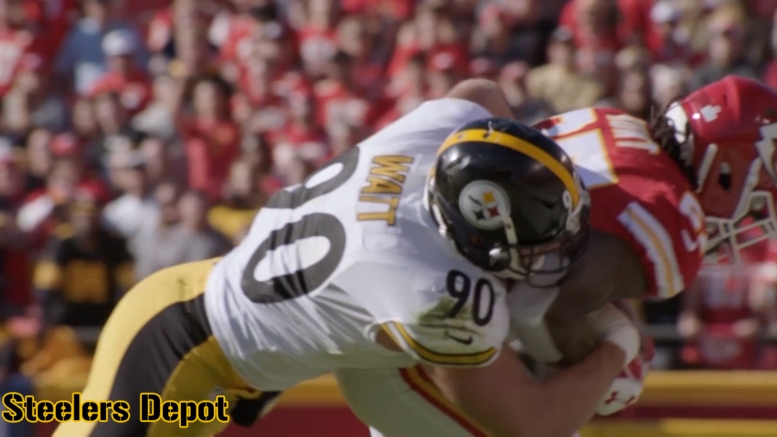 Whether it ought to be surprising or not, there are at least some players who do hold an interest in things like rankings. We have all seen players either praising or shunning outlets like Madden, Pro Football Focus, and the NFL Network’s Top 100 Players List relative to how they individually are judged.

The latter came up last night with the first installment of the series, counting down from 100 to 91, and one Pittsburgh Steelers player made it into that group, if you were paying attention. It was third-year outside linebacker T.J. Watt, how in his second season posted 13 sacks with six forced fumbles and made the Pro Bowl as an alternate.

It’s a nice honor for a young player to crack the list for the first time, and it’s not even apparent that Watt would care about such a thing. But his teammates do. Following the airing of the show, in which he came in at 93, James Conner, his draft classmate and fellow 2018 Pro Bowler, went to Twitter to proclaim that he will be “Top 10 after this season.. Yea I said it.. Top 10 !!”.

Getting into the top 10 is a pretty lofty goal, especially since the top 10 tends to be dominated by offensive players. For 2018, for example, eight of the top 10 players were offensive players, the only exceptions being Aaron Donald and Von Miller. It did start to even out as the list worked backward, as five defensive players came in between 11 and 20.

Is Watt going to be on the level of Donald and Miller? The odds go against it, for sure, but it’s an honorable goal to shoot for. Donald is seemingly breaking new ground for his position, while Miller has his eyes set on breaking records in sacks, including Michael Strahan’s single-season record.

The former first-round pick has talked about his confidence heading into his third season, saying that he felt he made major strides in his performance in the second half of last season. He also said that he felt much more prepared and able to take more risks in year three now that he has established himself, understands the defense, and has the trust of his teammates.

13 sacks and six forced fumbles are some strong numbers, but statistics only tell part of the tale. He could have an identical stat line in 2019, or even slightly worse, and still have had a better and more impactful season for the Steelers.

One area in which he can improve—and did improve late in the year—is in being a consistent source of pressure. His 13 sacks were largely a product of having a lot of success converting pressure into sacks, at a rate generally regarded as unsustainable, though that was mostly true of the first half of the year.