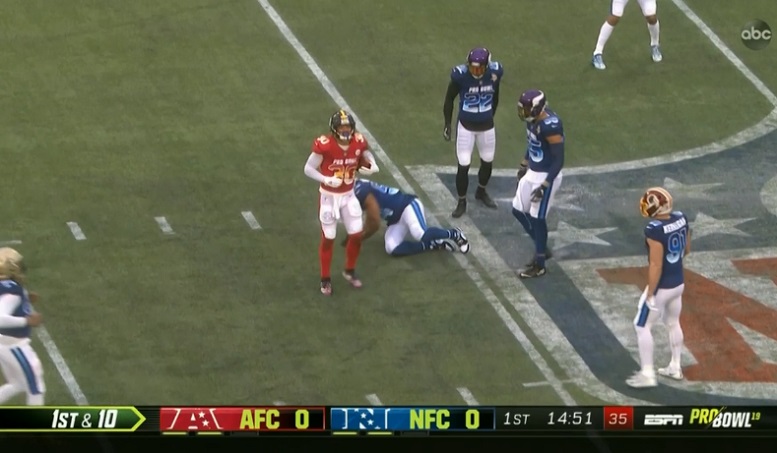 Pittsburgh Steelers running back James Conner was a recent guest on the podcast of current performing artist and former Duke pitcher Mike Stud. Among topics such as their friendship, spiritual beliefs and Conner’s battle with cancer, the Steelers’ running back also made a promise that as long as he remained a starter, he would continue to make the Pro Bowl.

Conner’s road to his first Pro Bowl selection last season was a bit of an unexpected one as he was thrusted into a starting role after Le’Veon Bell failed to show up last season.

The Steelers’ running back will now start his bid for another Pro Bowl selection this season and he may have a heads-up on years prior as this marks the first offseason that the 24-year old back has gone into already knowing his role with the team. The running back’s first two off seasons were clouded by the franchise tag negotiations and possible holdout from Bell. Conner spoke to Stud about what it was like being a rookie and dealing with Bell’s training camp absence.

“He sits out the whole training camp. So, I’m running and I’m like oh okay, I might ball out this year. Le’Veon gon’ show up a week before the season start. They tagged him, he getting $15 million dollars that year, obviously he gon’ start. So, he starts and he played that whole season and so I’m like damn.”

Conner finished his rookie season with just 32 touches and failed to record a reception or a touchdown. While his production and usage differed greatly from his college days, the Steelers’ running back maintained a positive mindset through it all.

“I said something gon’ happen because they were in contract (negotiations) again next year. I know I’m a starting running back. I’m staying positive forsure, I’m in the league, I’m healthy.”

Sure enough, something big was brewing on the horizon as Bell sat out another training camp with rumours that he could sit out for the entire year. Conner was not surprised by this challenge but was instead chomping at the bit as he showed up to camp in the best shape of his life.

“I’m running with the ones all throughout training camp again. (Le’Veon) holding out but he was talking after last season, he was like tag me again, I’m about to sit out. I’m chomping at the bit, oh you gon’ sit out, I’m about to work. I’m going hard in training camp, best shape ever of my life, my offseason training went good. I said this is year I’m going to be at my full strength, my best, they ain’t never see a me like this before, not even in college.”

Though Conner arrived in the best shape of his life, he had witnessed this exact scenario play out a year prior and was fully expecting Bell to show up a week before the season. When that did not happen, the former Pitt Panther realized this was his shot at showing the world what he could do.

As Bell’s absences continued, Conner’s production only increased as the Steelers hardly missed a beat with their new lead back. Conner recorded 973 rushing yards, 497 receiving yards and 14 total touchdowns as he earned an invite to the Pro Bowl. Now having experienced his first taste of the Pro Bowl, the Steelers’ running back is determined to make it a tradition for years to come.

Check out the full podcast between James Conner and Mike Stud below.