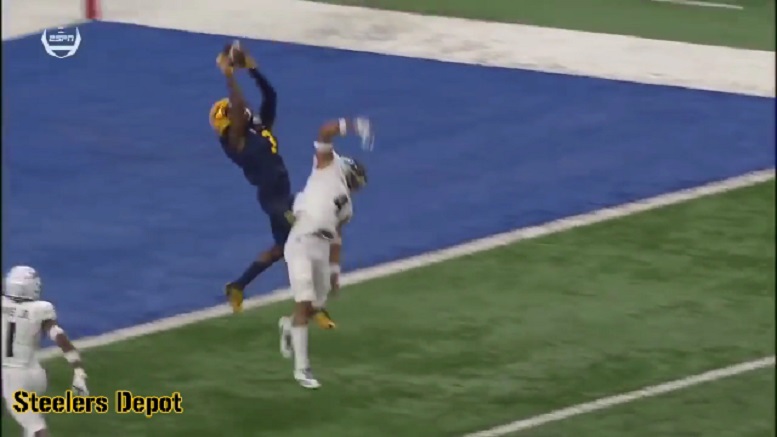 This past week I have made it point to go back and watch quite a bit of the 2017 tape of new Pittsburgh Steelers wide receiver Diontae Johnson. Obviously I had already seen a good portion of his sophomore season tape, but a deeper dive was still needed just the same. That 2017 season culminated with Johnson registering 74 receptions for 1278 yards and 13 touchdowns with quarterback Logan Woodside being the primary passer for Toledo that year. While Johnson showed a lot of good things during his 2018 junior season, his 2017 season was probably the better one and likely because of the quality of quarterback he played with.

Below are several highlights of Johnson’s 2017 season that I pulled aside for everyone to watch on this lazy Fourth of July holiday.

On this play against Ohio, you see Johnson start with a stutter move at the bottom of the screen. With his quarterback in distress to his side, Johnson finds an opening deep down the field and shows off a nice vertical and strong hands in making the catch.

Here is another great 2017 clip of Johnson showing off his nice vertical, strong hands, and great release off the line against Akron.

Also against Ohio in 2017, Johnson showed his ability to turn and find the football with a defender right in his face. I have two angles of this catch for you to see.

Hers another end zone contested catch that Johnson had in 2017 with this one being against Miami. He even takes a jarring hit after making this grab and still held on to the football.

Here is yet another great 2017 example of Johnson making defenders miss in the open field after catching a short wide receiver screen. His ability to stick a foot in the ground and cut is quite impressive. This catch and run came against Northern Illinois.

Johnson also showed a nice catch radius and ability to catch off target throws during his 2017 season at Toledo. Perhaps his best catch that 2017 season that illustrated both of those traits came in the game against Ball State. I have two different angles for you to see of that catch by Johnson.

Here is yet another great bad throw catch made by Johnson during the 2017 season and this one came against Northern Illinois. It was just a 2-yard reception, but it counts and shows that he can catch and secure the football quickly in preparation of taking a hit.

Johnson’s route running during the 2017 season was also quite spectacular. Look at this inside movr off the line to set up the corner route for a touchdown in a 2017 game against Akron.

Take a look at this route running against Eastern Michigan in 2017. Johnson’s head nod to the outside gets the cornerback turned around and it results in the Toledo wide receiver being wide open on the post route and he quickly tucks the football away for extra yardage after the catch.

This quick release off the line for an easy pitch and catch slant route against Northern Illinois is yet another great illustration of what a great route runner Johnson was as far back as 2017.

Summary: I could have easily added 10 more 2017 highlights of Johnson’s to this post but believe you now have enough evidence of how great he was and how well-rounded he was even during his sophomore season. The more tape of Johnson’s that you watch, the easier it is to see why he was drafted in the third-round by the Steelers and why the Tampa Bay Buccaneers were also looking to snag him in that round as well.