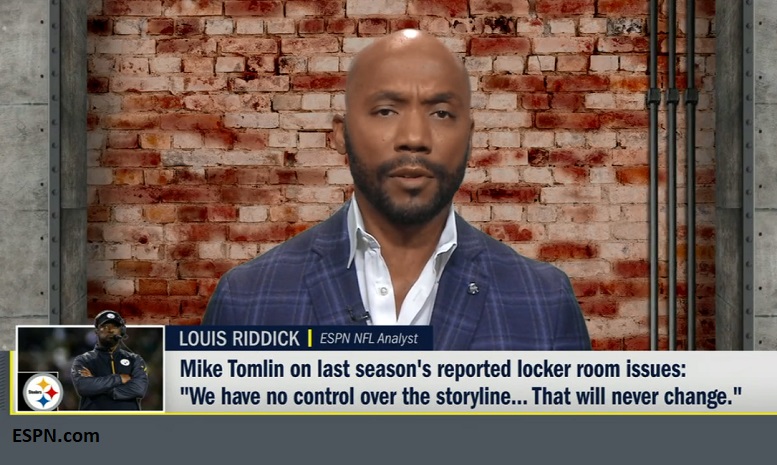 Are you buying the recent hard push in the media that the Pittsburgh Steelers will be a better team in 2019 than they were in 2018 as a result of ridding themselves of two huge distractions in wide receiver Antonio Brown and running back Le’Veon Bell? On the surface, ‘an addition by subtraction’ narrative is certainly being pushed hard by a few major media NFL analysts and it’s hard to ignore.

Last week, former Steelers running back Merril Hoge, who is a longtime NFL analyst for EPSN, said he likes the chances of the 2019 Pittsburgh team winning it all better than he did last year’s team. Hoge’s optimism for the 2019 Steelers is a result of them seemingly being more of a team this offseason with Brown and Bell now out of the picture. On Monday, another ESPN NFL analyst, Louis Riddick, was asked to give his thoughts on the 2019 Steelers and the possibility of addition by subtraction being a noteworthy this offseason and especially with those main subtractions being two great offensive players in Brown and Bell.

“I definitely am a believer in addition by subtraction,” Riddick said Monday morning. “I’m a big believer in chemistry. I’m a big believer in unity, brotherhood and having a healthy culture within the locker room. And look, Mike’s [Mike Tomlin] never just going to come out and say, ‘yeah, the wheels had come off and I lost control of my football team.’ That wouldn’t serve him any good, individually, and it wouldn’t serve their franchise any good, collectively. But I think there’s no doubt that there seems to be a renewed sense of togetherness, a renewed sense of, you know, we’re trying to get after this division, this conference, overall and we’re trying to make a run at this Super Bowl and we believe we still have the parts in place that we can do that.”

“JuJu Smith-Schuster is going to be a bonafide number one,” Riddick said Monday morning. “James Washington will step up, he will be a quality number two. Keep an eye on Diontae Johnson, the third-round pick out a Toledo, I think he was the best route runner in this draft.”

Riddick isn’t just bullish on the Steelers offense ahead of their 2019 training camp about to get underway, he seemingly expects the team’s defense to improve this upcoming season as well and especially if their first-round draft pick this year, inside linebacker Devin Bush, can get on the field right away.

“And then on the defensive side of the football, as I’ve said, pound-for-pound, Devin Bush Jr. was the best player in this draft, regardless of position; offense or defense,” Riddick said.

Because he believes in addition by subtraction and because he likes what Pittsburgh still has on both sides of the football in regard to overall talent, Riddick made it clear on Monday that he expects the 2019 Steelers to run the AFC North division this season and ultimately compete for the Super Bowl in February.

“So they are loaded for bear,” Riddick said. “I think this team is healthy from a mental standpoint. They feel like a lot of the distractions are on the outside, although as Mike [Tomlin] says, ‘you can’t control the narrative on the outside, but you can be professional on the inside.’ I think this team will come out and exude that kind of professionalism and I expect, look, I expect Pittsburgh to easily have a double digit win season and make the playoffs and be a force to be reckoned with in January.”