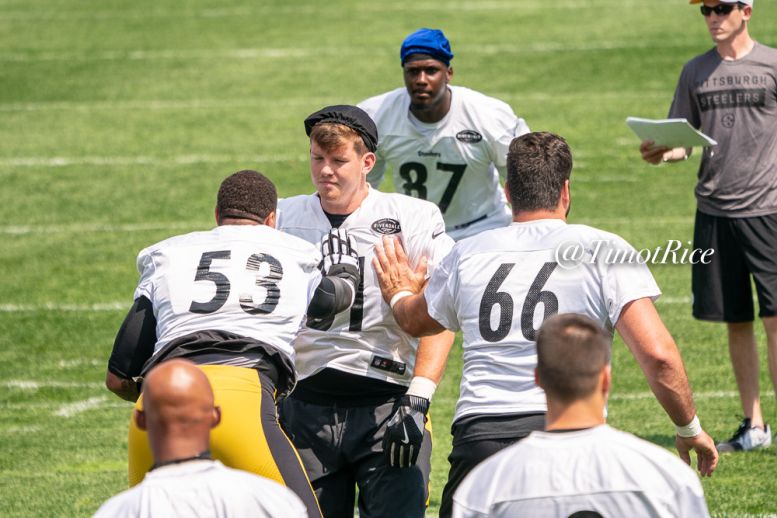 While offensive linemen in general don’t get near the respect they deserve, the MMQB Podcast decided to shine a light on the big guys up front. Andy Benoit and Gary Gramling ranked the top ten linemen in football in their most recent podcast and two of the Pittsburgh Steelers’ starting five made the list.

Coming in at #7 was right guard David DeCastro. Though the duo didn’t touch on DeCastro in-depth, they pointed to the Steelers’ effective screen game made possible by unique athletes like him. His ability to work in space isn’t unparalleled by certainly rare while his consistent play in pass protection and play strength in the run are an excellent combination. He’s dependable, low-maintenance, tough, and one of the quiet leaders along the Pittsburgh front.

He’ll reach the 100 career start mark early in the season and with him being just 28, it’s possible he makes another 100 in black and gold.

Maurkice Pouncey was slated two spots lower at #9. Gramling led the conversation about what made him a worthy add to the list.

“What they ask him to do I feel like, the range he has in sorta something that is not replicated by any center in the game.”

That unique athleticism feels a lot more apt to Pouncey than DeCastro. There’s virtually no center in the league who can do what the team asks of him. Maybe Jason Kelce or Rodney Hudson out in Oakland. But none do it as well as Pounce. It’s made all the more remarkable by the fact he didn’t miss a beat after recovering from a wicked knee injury that needed seven surgeries to correct after a staph infection. Did that hinder his athleticism? Not one bit.

Though some have questioned his durability, he’s started at least 15 games each of the last four seasons, 62 out of a possible 64. His career might not last as long as you’d like because of the nature of the position and those injuries but he should be able to squeeze out a few more quality seasons.

Benoit gave his take on the Steelers’ line as a whole.

“That offensive line in Pittsburgh, they were the best in the NFL last year. At least in pass protection. They were far and away the best. And Pouncey was a big part of that.”

And the numbers back that up. Despite Ben Roethlisberger recording nearly 700 pass attempts, he was sacked just 24 times. His 3.4% sack rate was the second-lowest of his career, trailing only 2016 (3.2%) while 2017 was his third best season (3.6%). Compare that to some of his early career numbers.

Dallas’ Zack Martin was voted the top linemen with 78 possible points. It was a collective, as they put it AP-style voting with Benoit’s points counting double, clearly not a democratic process. DeCastro had 51 while Pouncey finished with 47. Check out the whole list which we’ll again link here.