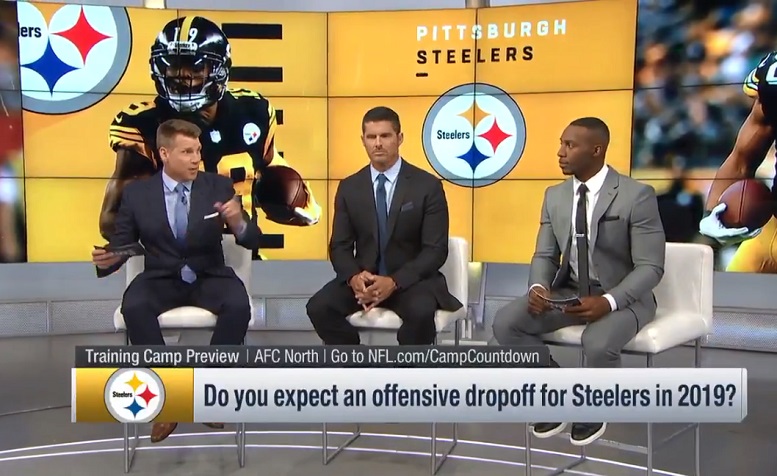 The more former NFL players the NFL Network attempts to use as analysts, the worse the analysis seems to get. The latest example of that happened on Wednesday when former NFL cornerback Brandon Boykin was a guest on NFL Total Access and joined former NFL quarterback David Carr in breaking down the expectations for the Pittsburgh Steelers offense in 2019.

First up was Boykin and while it was fine for him to question if wide receiver JuJu Smith-Schuster will have a stellar 2019 season with wide receiver Antonio Brown no longer being part of the team, the second reason he gave for doubting the Steelers offense this coming season was borderline asinine.

“Absolutely, for a couple of reasons,” Boykin said when asked if he expects the Steelers offense to have a drop off from last season in 2019. “Number one, you don’t lose a guy like Antonio Brown and not replace the productivity that he gave you and get better the next season. You’re talking about a guy that had 1,300 yards, 15 touchdowns. And I know a lot of people like JuJu Smith -Schuster, I like JuJu Smith-Schuster as well. I think he’s a great receiver, but let’s be honest, without Antonio Brown and the attention that he commanded all year, I don’t think JuJu Smith-Schuster’s numbers would have been the same. So now that he’s number one, we’ll see what he does.”

Unfortunately for Boykin, he did not stop right there.

“The second thing that I feel like is that they don’t have a backup quarterback,” Boykin said. “Nobody has experience other than Ben Roethlisberger. If he gets hurt, what’s the situation going to be?”

Well, Brandon, the situation would be like most other team’s NFL if they were to lose their starting quarterbacks to injury. Can anyone name one team in the NFL that could win the Super Bowl in 2019 if they were to lose their starting quarterback for the season due to injury? What the Philadelphia Eagles pulled off a few years ago with Nick Foles was an extreme rarity and also made possible because their injured starter at the time, Carson Wentz, was still on his rookie contract. Not many teams enter 2019 with a great backup quarterback sitting behind a playoff caliber starter. I suppose Boykin also prefers to go fishing by putting fish in a barrel and shooting them with a gun.

After Boykin was done with his brilliant analysis, Carr decided to pile on the former cornerback’s comments about the Steelers offense likely to struggle in 2019 without Brown playing opposite of Smith-Schuster.

“Brandon hit it right on the head for me,” Carr said. “From a defensive guy to say that I don’t know who you’re afraid of other than JuJu. I mean, that just tells you how they’re going to play him. They’re going to put JuJu on the best corner and then the other guys just got to find a way to win and it’s going to be difficult. We saw JuJu one game without Antonio last year and it wasn’t the greatest, so we’ll see what they can do.”

Perhaps Carr and Boykin should both watch ESPN more and especially when their fantasy football expert Matthew Berry is on. Several weeks ago at a fantasy football summit, an assembled expert panel talked about Smith-Schuster and what his stat expectations for the 2019 season should be with Brown no longer lining up opposite him. During that discussion, Berry passed along Smith-Schuster’s career stats from the games that Brown failed to play in the last two seasons.

Berry also failed to include the three quarters that Brown wasn’t on the field for in the Steelers 2017 Week 15 loss to the New England Patriots. After Brown left that contest with his injury, Smith-Schuster was targeted a total of four more times and he caught all 4 passes from quarterback Ben Roethlisberger for 84 yards. In total, Smith-Schuster has caught 24 passes for 339 yards and 3 touchdowns in the three-and-a-half games that Brown has missed in the last two seasons. Smith-Schuster also had another touchdown via a kickoff return in that 2017 Week 17 game against the Cleveland Browns.

Do people not remember that wide receiver Darrius Heyward-Bey and Eli Rogers even played a lot of those snaps along with Smith-Schuster in the three-and-a half games that Brown missed the last two seasons? Lining up predominately with Smith-Schuster in 2019 will likely be Donte Moncrief, James Washington and rookie Diontae Johnson and while two of those three players are very green, the other one, Moncrief, has been in the league for quite a while. In short, don’t expect Smith-Schuster to suffer without Brown as much as both Carr and Boykin want you to believe he will.

Boykin, in case you forgot, played one season in Pittsburgh with the Steelers back in 2015. He never played another down after that season.