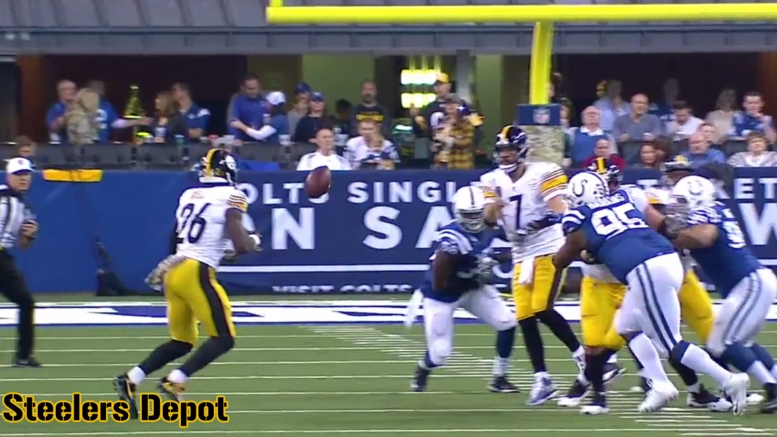 Pro Football Focus recently highlighted 17 games—one for every week—that they are especially looking forward to during the 2019 season. Two of the Pittsburgh Steelers’ games were highlighted among them, including former running back Le’Veon Bell’s New York Jets hosting the team that drafted him in Week 16. Also featured is their Week Nine hosting of the Indianapolis Colts.

The highlighted feature of the latter is Steelers quarterback Ben Roethlisberger going up against the Colts’ secondary. The future Hall of Famer has had a good deal of success throwing the ball against the Colts the last few times these teams have played, but ostensibly, they should be a better team now. Writes Ben Linsey, in part:

Roethlisberger has faced the Colts on four occasions since 2014 and in those games, he has a 96.0 passing grade behind 9.7 yards per attempt (1st among quarterbacks with 50-plus attempts against the Colts over that span), a 133.5 passer rating (1st) and a 15-to-1 touchdown-to-interception ratio…

The Colts’ defense was much improved last year compared to years past. That was largely due to a heavy focus on a relatively simple zone coverage scheme that allowed defenders to play fast and react to plays in front of them, limiting the big plays against their defense.

The Colts were one of the teams that finished just ahead of the Steelers to claim a Wildcard spot last season, by the way. Now, regarding the second matchup on the list, I don’t think there needs to be much background as to why Pittsburgh facing Bell is highlight-worthy:

This matchup makes the list for the revenge factor. Clearly, Bell wanted more money from the Steelers than they were willing to give him to the point that he sat out the entirety of last season rather than play on the franchise tag. The debate over the value of the running back rages on, with Melvin Gordon being the most recent name thrown onto the flame, but the situation creates for an interesting matchup with Bell’s former team.

Linsey also notes that the Steelers on defense should be better able to defend what Bell can do in the passing game thanks to the additions that they have made at the inside linebacker position, particularly with Devin Bush, but they maintain that Bell still ranks first in their rankings in Wins Above Replacement (WAR).

Both of these games should bring some intrigue, sure, but there are a lot of interesting games on the Steelers’ schedule, including their opening match against the New England Patriots, whom they beat late last season, and nearly did the year before that as well.

I would assume that the games against the Cleveland Browns this year should be among the most interesting in a long time if Cleveland is really as competitive as they’re said to be, and the Steelers remain contenders as well.