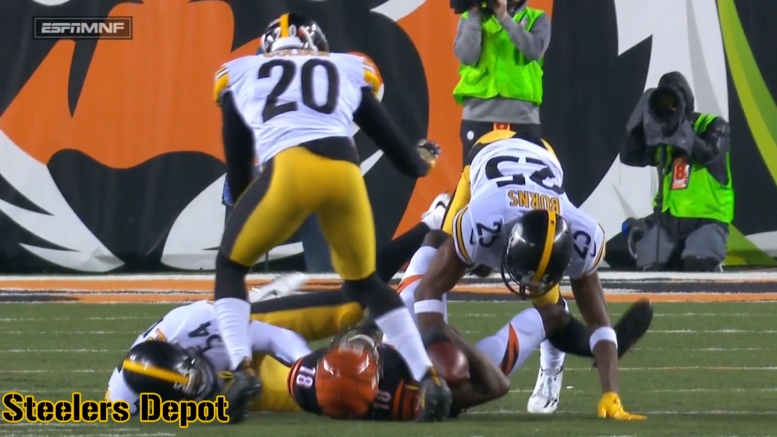 Cincinnati Bengals seven-time Pro Bowl wide receiver A.J. Green left Saturday’s practice with an apparent lower body injury. Initial, pre-MRI diagnosis suggested that it was minor, a sprained ankle. But actual diagnosis Sunday proved the injury to be more significant than was hoped. And there’s more to the story as well.

AJ Green tore ligaments in his ankle practicing at the University of Dayton’s Welcome Stadium, as part of NFL’s 100th-anniversary celebration. Field conditions were considered subpar; more scrutiny expected over decision to practice there. Green expected to be sidelined 6-8 weeks

Green suffered torn ligaments in his ankle while the Bengals were practicing inside of Welcome Stadium, the football field at the University of Dayton. The decision to practice there was made by the team, who approved the conditions of the field, but the request came at the behest of the NFL as part of the league’s centennial celebration.

The ninth-year veteran is expected to be out for up to six to eight weeks, which puts his ability to start the season in jeopardy, which goes without saying, though it is believed that no surgery will be required. He missed roughly half of the 2018 season with a toe injury that required surgery after the season, on the opposite foot.

Players were reportedly critical of the conditions of the field even before Green’s injury. Jay Morrison quotes fellow Bengals wide receiver Tyler Boyd as saying of the field, “it’s somewhere we shouldn’t have been”, adding that “there were rocks, pebbles out there. I was falling all over”.

This is certainly reminiscent of the Pittsburgh Steelers’ participation in the Hall of Fame game a few years ago, playing on the Canton field where former kicker Shaun Suisham suffered a torn ACL that was attributed in part to the quality of the playing surface. In a subsequent season, the NFL was pressured to cancel the game because of the field condition.

To make matters worse, Green is in a contract year. While both sides were in the process of negotiations and reportedly both very much determined to get something done, it was said that the two sides remained far apart by the time he was injured.

It’s certainly possible that the injury will stall contract talks, though that won’t necessarily be the case. Depending upon how long it lingers, however, they may have to call upon some additional help at the position to complement Boyd and John Ross.

The Bengals first two games of the regular season, should the injury bleed into September that far, come against the Seattle Seahawks and the San Francisco 49ers. They will be hosted by the Steelers in Week Four on the 30th, during prime time, though one would think Green should certainly be back by then.