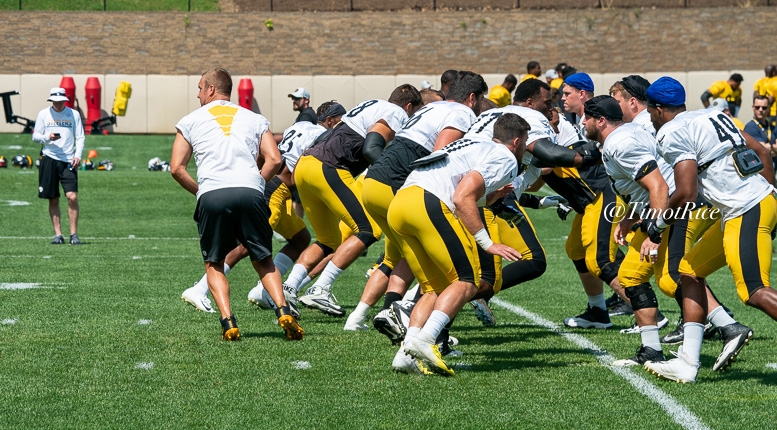 Let’s move onto the offensive line and check out the tackles.

Alejandro Villanueva: Not much to note with him at this point. Last year was his best season and though Myles Garrett gave him predictable fits in Week One, his beginning of the year was much better than previous ones. Just stay healthy and battle Bud Dupree every day in practice. Make him a better player.

Last thing with Villanueva. Does he start getting the veteran day off of camp? His job is as secure as it can be, there are a ton of other players behind him who need to be evaluated, and about to turn 31, you want to begin managing his reps. He’s already talked about recurring shoulder issues each year and this team can’t afford to lose him. Here’s what he said last year after missing time with a shoulder injury.

“So, it’s a very unnatural movement playing on the offensive line and constantly punching and so every year, usually, it’s just my body is signaling that it’s a little bit too much and it gets a little overworked,” Villanueva told Pat Kirwan and Jim Miller of Movin’ the Chains. “But then in a couple of days it goes away. I have it every single year. This year they’re just being a little more cautious with it.”

Matt Feiler: Now it gets interesting. Feiler will be the clubhouse leader for the right tackle spot, I assume the first snap of practice will go to him, but it’ll be battled throughout the summer. Feiler’s impressive with his strength and technique and he’s not a terrible athlete whose frame makes him difficult to get around in pass protection, though he’s still vulnerable to losing the edge if his kickslide isn’t clean. His key will be consistency rep to rep, something the younger, rawer Chukwuma Okorafor may struggle with.

Chukwuma Okorafor: Okorafor will offer the biggest push to Feiler’s spot. One of those players, and it probably doesn’t get talked about enough, who will look to make the jump Year One to Year Two. Considering how much a project he was coming out of the draft, you are hoping to see him make significant progress. His tape last year is fairly limited, one spot start against Denver where he got a lot of help, and some tackle eligible work against 4-3 defenses. Look for him to be a little stronger, play with consistent nastiness, and work on his base in pass pro.

Jerald Hawkins: Obviously, getting healthy is the first thing with him. Hawkins told reporters he considered himself about 80% during the spring with the goal to be around 90% for the start of camp. Does he practice right away? I think – hope, at least – he avoids PUP, but the team could hold him out of team drills the first week or two. Would be a slow start for a guy who can’t afford it.

When he’s been healthy, he’s looked good. You can see why the front office drafted him. But that health has been fleeting. It sounds like he could get some action at guard for the first time in his career. With the tackle logjam, it makes sense, and versatility will be critical for his chances.

I still think he’ll be largely ok with work at tackle. Second team LT opposite Okorafor would be my guess.

Derwin Gray: The team’s 7th round pick, he’s someone you should expect to move around quite a bit. You don’t want to be stuck as just a 3rd team tackle. You’re just not going to get reps. But he’s reportedly been playing every spot sans center and the team openly mused about moving him to guard. Could happen sooner than later (though our report preferred for him to stay at tackle). Do get some Ramon Foster vibes with him.

Like most rookies, seeing how he finishes, both individual practices and training camp in general, will be at the top of my list. There’s some fire in his belly I want to see on display, too. Finish those blocks.

Zach Banner: He’s still here which I’ll be honest, is a surprise. Banner was a mid-camp add last year but well enough liked by the coaching staff to make the roster, though he never appeared in a game. His weight is in a much better place, that’s been a driving factor in him sticking with the Steelers. Hopefully he’s keep that weight under control and gets through the conditioning test. Again, playing time could be limited and he lacks the versatility others do. Banner really only plays right tackle, though I suppose he can do a little on the left side too.

Does Shaun Sarrett like Banner as much as Mike Munchak did or will this tweak in the coaching staff cost Banner his spot? We’ll see.

Damian Prince: Made the 90 man roster as a tryout UDFA out of Maryland, where he was teammates with Derwin Gray (they both grew up in Washington DC too, though didn’t know each other until college). Open book with him. Again, reps are hard to come by. And I worry about him being too limited of an athlete to work in space. His testing certainly wasn’t good. But we’ll see.