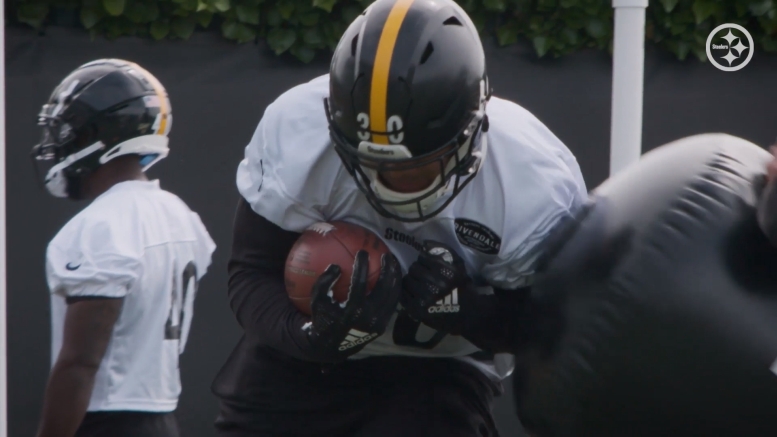 James Conner: Coming off a Pro Bowl season, what can Conner do for an encore? While he put up good efficiency numbers in 2019, his play-to-play consistency still needs to improve, and he obviously has to protect the football better. Staying healthy wouldn’t hurt, either.

Jaylen Samuels: A bit of a surprise performer as a rookie, Samuels played well considering how relatively new he still is at the running back position. While I think the offensive line can be largely credited to his success on the ground against the Patriots, opening up big holes for him, he’s also learning to trust his blocks. His bigger contribution can be in the passing game.

Trey Edmunds: Edmunds spent the final four games on the 53-man roster but did not contribute on offense, only on special teams. However, he reportedly had a strong spring, and likely would have to force the team to keep four running backs to make it. His special teams abilities could allow that to happen.

Ralph Webb: A 2018 undrafted free agent, the Steelers are already his third team, signed to the practice squad after Edmunds got the call-up. The slight Vanderbilt product ran for 102 yards on 31 attempts with two scores in the preseason along with five catches for 28 yards and another touchdown.

Malik Williams: Another 2018 undrafted free agent, Williams was a futures signing after spending time with the Falcons. At 6’3” and 221 pounds, his size is atypical of the position.

Benny Snell, Jr.: Other than Conner, Snell is the highest the team has drafted a running back since Le’Veon Bell. The fourth-round pick has a lengthy collegiate history of running the ball with success, and has an infectious attitude. He could contribute as a rookie if the team allows for more shareholding at the position.

Travon McMillian: A rookie college free agent, McMillian will almost surely be trying to compete for a spot on the practice squad. He rushed for over 3000 yards with 23 touchdowns in four years at Virginia Tech and Colorado.

The main objective in training camp is to see how this group comes together. We know that Conner, Samuels, and Snell are going to be on the roster, but workload will have to be determined. As far as Samuels goes, one of his priorities will be working on his pass protection. Snell, of course, will have to show everything. Edmunds will have to make himself look uncuttable as an all-around contributor.