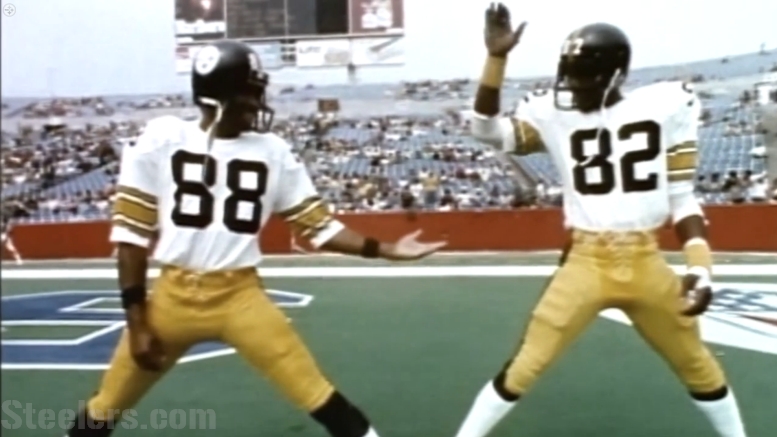 Question: Who is the greatest wide receiver in Steelers history?

If you didn’t already know where this was going, then shame on you. After two days of talking about the top quarterbacks and then the top running backs in Steelers history, both of them successfully generating discussion, we’re obviously going to turn our attention to other positions as well, starting with the wide receiver position.

But unlike the two aforementioned positions, I think the discussion here isn’t as straightforward. You have Terry Bradshaw and Ben Roethlisberger towering over everybody else at quarterback, and ditto for Franco Harris and Jerome Bettis at the running back position. There are more options for the top spot at wide receiver.

In fact, I think there are four primary candidates, all of whom will enter the discussion. You already have the two who are in the Hall of Fame, the dynasty players of John Stallworth and Lynn Swann. Their (regular season) stats might not wow you, but they played in a different era.

Then there’s Hines Ward, whom many believe deserves to be in the Hall of Fame, even if they don’t think he will make it. He is a Super Bowl MVP and a wide receiver who had a rule made because of him, something that doesn’t happen too often.

Finally, of course, there is Antonio Brown, who is public enemy number one right now. But putting aside the ridiculousness of his behavior and his thinking, he has clearly been one of the very best players in the NFL in the past six years. I don’t think I have to dig through them for the umpteenth time for this discussion.

I do want to throw two more names out there, just for the sake of discussion, and those are Louis Lipps and Yancey Thigpen. These are two great wide receivers in team history who can get looked over because of the era in which they played, or the inability to sustain their success.

Lipps is fourth among receivers in yards in team history behind only Ward, Brown, and Stallworth. Thigpen didn’t have as much longevity, but he had big seasons, including two 1300-yard years. His 1398 yards in 1997 was a team record until Brown broke it in 2013. Plus, they both have cool names.

Again, as I mentioned in the two previous articles, this list isn’t meant to be exhaustive, so if you have a candidate you want to name, just talk about him instead of saying I ignored him. Want to go the Buddy Dial route? Knock yourself out. Are you Tyler Grisham’s mother? Give him a shoutout. And let’s not forget Derek Moye (I mention him because I know at least one family member is a somewhat regular reader. Good guy).