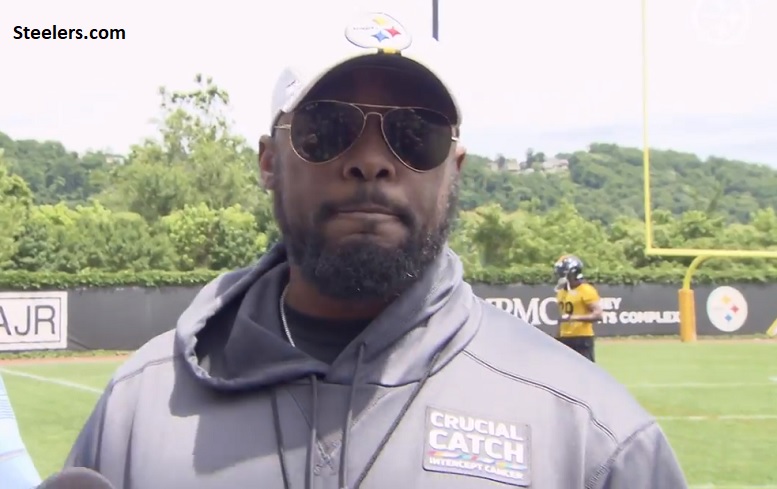 On the surface, it sure sounds like Pittsburgh Steelers rookie wide receiver Diontae Johnson has had a great first set of NFL offseason practices. After all, not only did Steelers veteran cornerback Joe Haden say on Tuesday that this year’s first of two third-round draft picks out of Toledo looks like a “good one” after first praising his route running abilities, the team’s starting quarterback, Ben Roethlisberger, went as far to say that same day that his new wide receiver has been “impressive” based on the time he’s worked with him this offseason.

Because of all the praise that Johnson has received in recent days, Steelers head coach Mike Tomlin was asked during his Wednesday post mandatory minicamp practice press conference to give his assessment of the young wide receiver after first being informed of a few of the glowing progress reports he’s received from a few of the team’s quarterbacks. Tomlin made sure to quickly inform all assembled media members that what Johnson has done to date on the practice fields of the UPMC Rooney Sports Complex must now be duplicated on the field of Saint Vincent College in Latrobe a little more than five weeks from now.

“Again, I see a guy that looks pretty good in shorts, you know,” Tomlin said of Johnson. “The physicality and the intimidation element of the game, particularly as it relates to the wideout position, you just don’t know what you’re looking at until you get those guys in uniform. So, you know, I try not to paint with a broad brush off of things that I see out here this time of year. We’ve all seen really impressive guys out here that disappeared in Latrobe, particularly at that position.”

Tomlin throwing a little cold water on what Johnson has done to date during the offseason practices in shorts isn’t really surprising. After all, Tomlin has seen quite a few young wide receivers have great showings in shorts only to go on and not follow those practices up with equal or better performances during training camp and the preseason.

Regardless of what Tomlin said on Wednesday, it certainly sounds like Johnson maybe had one of the better football-in-shorts showings of any rookie wide receiver in recent memory. Will he be as good or better during training camp and the preseason? I can’t wait to find out and I bet Tomlin feels the same way. If anything, Johnson should arrive in Latrobe with quite a bit of confidence based on how he performed the last four weeks in Pittsburgh.