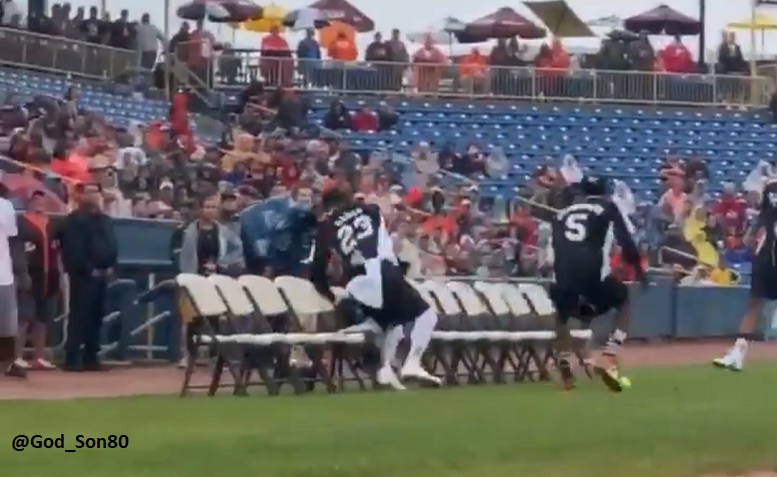 Pittsburgh Steelers cornerback Joe Haden was back in Cleveland Saturday to take part in a celebrity softball game at Classic Park that was put on by Cleveland Browns wide receiver Jarvis Landry and as you can probably imagine, he gave 100 percent on the field. In fact, Haden giving 100 percent on Saturday almost got him injured.

As you can see in the video below that was shot by Landry, Haden, was the captain of his team, went crashing through a few chairs while attempting to catch a foul ball during Saturday’s charity softball game. Fear not, however, as it doesn’t appear as though Haden suffered an injury. Well, maybe his pride was injured as he failed to catch the ball before tumbling over a chair.

The charity game was reportedly cut short due to weather and Haden held a session with the Cleveland media afterwards.

Even though the Browns cut Haden ahead of the 2017 regular season getting underway, Haden made sure to talk about how much he still loves the city of Cleveland and he paid homage to the team’s fan base as well, even though he’s now a member of the Steelers.

“But I can still respect the Cleveland Browns, the fan base, the city,” Haden said Saturday, according to Mary Kay Cabot of cleveland.com. “I love Cleveland. Literally I still love it to my heart. But it’s just the organization-wise, the way things were ran, you can’t control that. I’m so, so happy for them, and the people, they show me nothing but love, so that’s why I always want to make sure there’s no hate there. It’s a business. You’ve got to do what you’ve got to do.’’

The Browns originally selected Haden in the first round and seventh-overall in the 2010 NFL Draft out of Florida. The cornerback played his first sevens seasons with the Browns but was on teams that collective won just 29 games during his time in Cleveland.