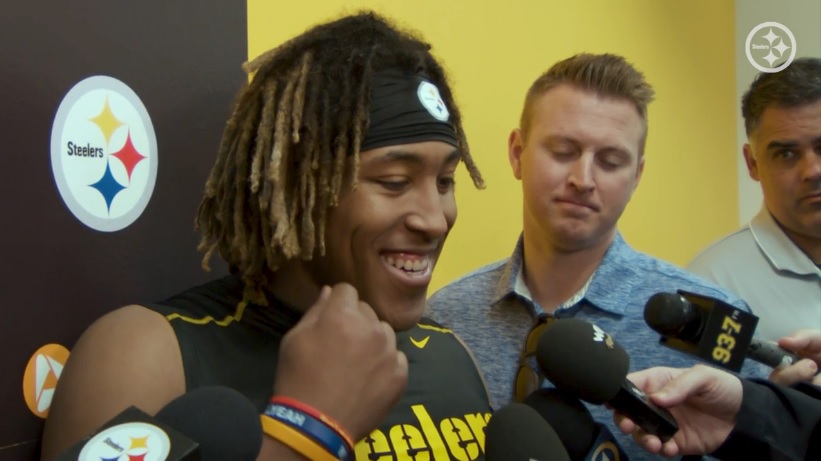 It is incredibly difficult to mention a lead running back in today’s football landscape without mentioning his workload. While the bell cow running back has seemingly been revived over the past decade, it has brought along a lot of questions and concerns. Many of those questions are about the workload of a running back, how much mileage can a running back rack up before the wheels fall off.

It is a familiar question that the Pittsburgh Steelers have had to deal with over the last few seasons with Le’Veon Bell and though the talented running back has now scampered off to New York, the lingering concern of a running back’s workload still remains in Pittsburgh.

The Steelers have toyed with the idea of a running back rotation after watching James Conner go down with an injury in his first season as the team’s lead back and the idea makes sense after drafting Kentucky running back Benny Snell Jr. in the fourth round of this year’s draft. Snell comes with a few concerns of his own after an extensive college workload for the Kentucky Wildcats.

Obviously, Snell is not expected to be the Steelers’ lead back anytime soon but one still has to wonder if there is any reasonable concern about his NCAA workload. Below are all the running backs from Power Five schools that tallied over 650 carries from 2008-2015. Using 2008-2015 as a benchmark gives the running backs at least four years of experience in the NFL which should give an indicator on any risks involved. 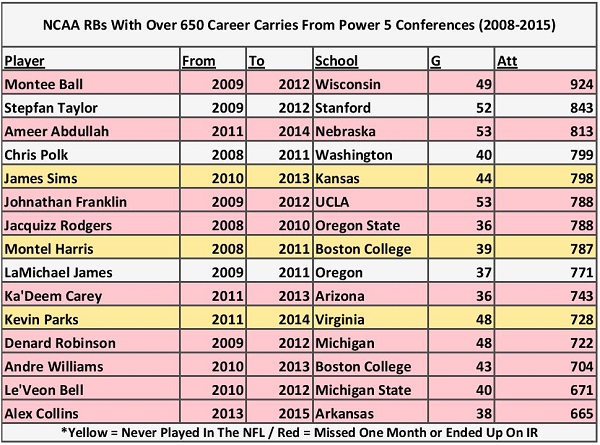 A total of 15 running backs fit the bill and the results are quite alarming to look at. Nine of the 15 running backs have either missed one month or ended up on injured reserve with a major injury at one point or another. Consider that three running backs listed above never played a single snap in a regular season NFL game and you get nine of 12 running backs in the red.

It goes without saying that playing the sport of football brings a high chance of a serious injury. Most of the players above have been injured at one point or another but so have many other NFL players and running backs. While the data above shows that an injury risk is very high for running backs with a high college workload, what would be more telling is determining the type of injury and at what point of their career a major injury occurred.

Listed below are the nine injured running backs from above and the details of their first major injury, such as what area the injury occurred in and how many NFL rushing attempts they accumulated at the point of injury. 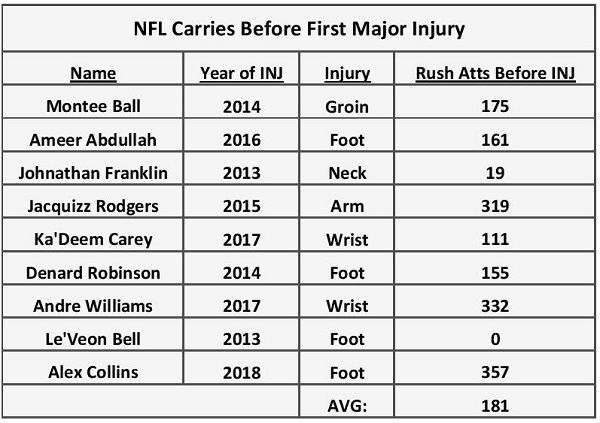 Only three of the nine running backs managed to rush for over 175 carries before either missing a month or hitting the injured reserve. The average amount of rush attempts before a major injury was 181 carries, definitely a concerning mark. The most common injury was to the foot area which puts added meaning to the ‘running the wheels off a running back’ phrase. Bell, who recorded 671 carries during his time at Michigan State, is one of the backs who suffered a foot injury as he missed approximately six weeks from mid August to late September during his rookie season.

The data holds strong even when looking at Conner, who was drafted in 2017, thus making him ineligible for the data. Conner recorded 668 carries at Pitt and suffered a season ending knee injury after just 32 rushing attempts in his rookie season.

Shifting the focus back to Snell, there is obviously some legitimate concern with his college workload though barring any major injuries to Conner and Jaylen Samuels, it is unlikely he will be tasked with being the Steelers’ lead back in the near future. Instead, the Steelers would be wise to continue exploring the possibility of a running back rotation in order to preserve the engine and mileage of both Conner and Snell.