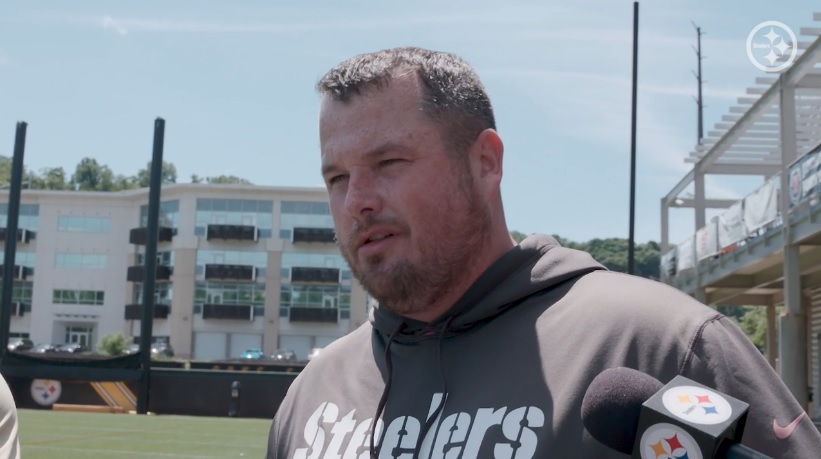 Get the job done. That’s the mantra of an offensive linemen. Don’t have to love it. Don’t have to agree with it. Just do it. It’s no surprise Shaun Sarrett, a former linemen himself and now in charge of the Steelers’ big uglies, is adopting the same approach as a coach.

He summed up his philosophy the only way a linemen can.

“I guess my philosophy would be what Randy Fichtner wants to run,” he told reporters via Steelers.com. “How he sees things, that’s the way I’m going to do it. Try to make it easy for them. If he has certain plays he likes, you know what, I’m going to like them too. I’m going to make them work.”

The offensive coordinator and line coach have to build a strong relationship. Everything the offense wants to do is predicated around how the line is going to block it. Run or pass, it doesn’t matter. Those ideals might not always match. One guy might like outside zone, the other would prefer to run inside and power. But the coordinator wins out, it’s his show to run, and the line coach must adapt.

It’s pretty clear Sarrett is all-in on doing whatever he can to help Fichtner out. While Fichtner oversaw a successful unit last year and should definitely get credit for turning around a habitually underperforming red zone offense, this year will bring its own challenges. His focus will be on the offense not missing a beat without Antonio Brown. To do that, he’ll need a successful run game and creativity in getting JuJu Smith-Schuster plus matchups.

Hiring from within is another plus in spite of losing Mike Munchak. Bringing in a new OL coach with a second year offensive coordinator who lacks a league-wide reputation would make that relationship trickier and hard to predict.

Of course, both coaches are still in good environments. The Steelers’ line is one of the strongest facets of the team, arguably the strongest top to bottom. That’s going to make Sarrett and Fichtner’s job all the easier. Being able to promote both coaches from in-house is rewarding for the entire offense and something not every team can claim.