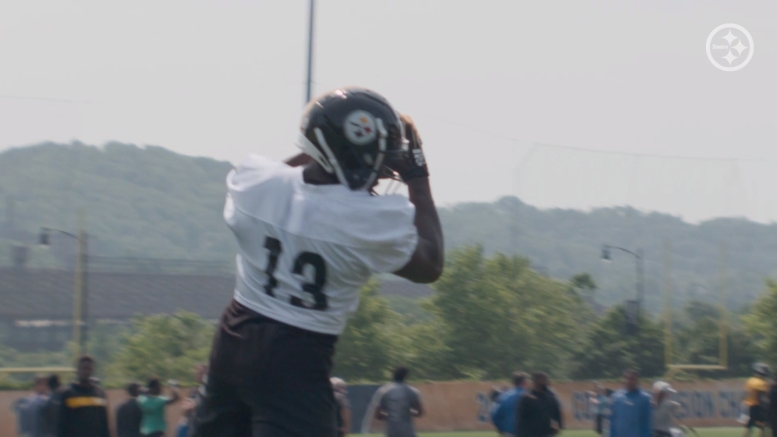 You’re not going to find a whole lot of negative reviews for players in shorts. For one thing, unless you’re really new to your position and raw, or just very unathletic relative to where you play, it’s hard to look bad without pads on and soft team drills. For another thing, it’s just the time for optimism all around, and people don’t want to talk negatively.

A lot of people who sound like phenoms in June end up being on the bench in September, but at least for now, the Pittsburgh Steelers are pleased with what they are seeing from their young wide receivers as they look to fill the void left in the wake of the Antonio Brown trade.

Specifically, the offense could be counting upon James Washington, a second-round pick in 2018, and Diontae Johnson, a rookie third-rounder, to work with JuJu Smith-Schuster for the offense. There are other names involved, like Donte Moncrief, of course, but these are the guys that they hand-picked to run their system.

And Mason Rudolph was hand-picked to be capable of leading it, even if he may spend his entire time in Pittsburgh as Ben Roethlisberger’s backup. The second-year quarterback has been getting some first-team reps with the veteran taking days off, and he’s has some observations on the team’s young wide outs.
“He’s caught about every ball I’ve thrown to him”, he told reporters when asked about Johnson. “So, that’s a good sign. But he’s just quick, man, and he’s picking up the offense, you know, very fast. He’s very coachable and he’s very hungry to learn, so that’s good to see in a young guy”.

Johnson has spent most of the spring limited to individual drills mostly, but reportedly began working team drills this past week in the final OTAs as his hamstring injury improves. It appears as though he is shaping up to being a full participant for minicamp next week.

As for Washington, his college teammate, Rudolph said that “he’s doing great. I think he’s running better. Just like myself, he’s the older guy. He’s kind of managing and coaching some of the wide receivers along with the other leaders in that room, and just general football knowledge, 10 times better. He understands our offense”.

“Like Diontae’s going through right now, we’re asking him to run a whole lot of routes that maybe he didn’t do at Toledo, and it was the same last year with reps”, he added. “Just reps, man, that’s the biggest teacher”.

And that goes as much for him as for the men he’s throwing to. Rudolph himself is looking to compete with Joshua Dobbs for the backup quarterback role after spending his rookie season in street clothes as the number three after being drafted in the third round in 2018.