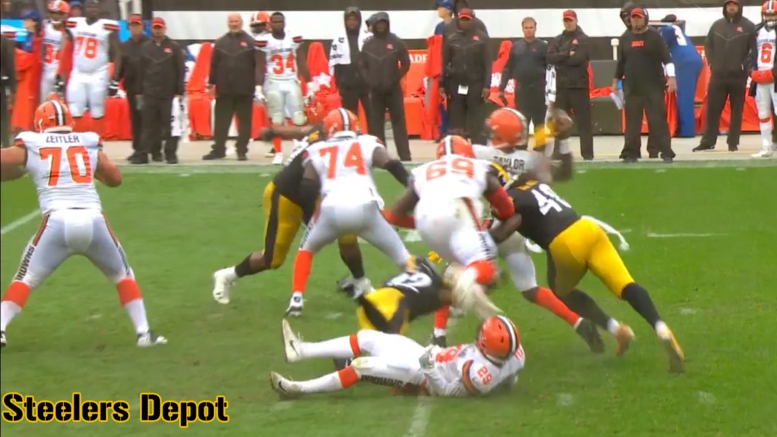 In his first four seasons in the NFL with the Pittsburgh Steelers, outside linebacker Bud Dupree has registered just 20 sacks with a single-season high of 6 in 2017. That production, along with the rest of Dupree’s career defensive play, which has included him registering 132 total tackles, 2 forced fumbles and an interception, was evidently good enough for the team to allow their former first-round draft pick out of Kentucky to earn over $9 million in 2019 after picking up his fifth-year option well over a year ago. On Wednesday. Steelers defensive coordinator Keith Butler talked some about Dupree and how he has no issues with how the outside linebacker has played so far during his time in Pittsburgh.

“He’s done everything I’ve asked him to do,” Butler said, according to Ray Fittipaldo of the Pittsburgh Post-Gazette. “Bud is all for us winning. He’s not all for Bud. He’s all for the team. That’s what I like about him.”

Butler also made it clear on Wednesday that he’s not overly concerned with the fact that Dupree has averaged just 5 sacks a season in his first four seasons in the NFL and him having just 5.5 quarterback take-downs last season.

The last several weeks, Dupree has tried to state his case more than just a few times that he probably would have had double-digit sacks last season if not for holding calls and him failing to take down a few quarterbacks in a two other games. Him stating that numerous times even resulted in me going back and reviewing those specific plays that he listed, for whatever that was worth. Regardless of what you think about Dupree’s missed sacks claims, the fact of the matter is that if you were to adjust his numbers, you would have to do the same league-wide. In short, most view his claims as a paper-thin excuse.

Sacks aside, and if you buy into stats from last season from Pro Football Focus, Dupree’s 5.9 pass rush productivity stat that he registered in 2018 ranked him 49th overall when compared to other 74 listed edge-rushers around the NFL that had a minimum of 250 pass rushing snaps. In short, if Dupree had registered a higher percentage of quarterback hits and hurries in 2018, it would be a little easier to look past his total sack numbers.

While he has worked the last several offseasons with pass rushing guru and former NFL player Chuck Smith, Dupree’s arsenal of overall moves and counters hasn’t noticeably improved. Just as it was when he was in college, Dupree’s main pass rushing asset continues to be his great get-off and his occasional ability to beat tackles around the edge. He never has been a very good speed to power pass rusher. A lot Dupree’s career pass rushing production has also seemingly come when opposing quarterbacks aren’t afforded the opportunity to, or choose not to, step up into the pocket.

As Alex Kozora stated recently in a post, Dupree has had to deal with a few injuries the last several seasons and thus perhaps there’s a small reasons to be optimistic that the outside linebacker will have a career year in 2019 when it comes to his overall pass rush productivity, if he can play in all 16 games without as much as an ingrown fingernail. Dupree recently stated that he’ll indeed have a career season in 2019, so we’ll all have to sit back and watch to see if his proclamation is carried out.

A career year in 2019 for Dupree, and one that includes him getting closer to double-digit sacks and a much higher pass rush productivity number would obviously help all parties involved. It would also likely land him a decent free agent contract with a different team next offseason because even though Butler spoke fondly of the outside linebacker on Wednesday. it’s hard to imagine he playing in Pittsburgh in 2020.