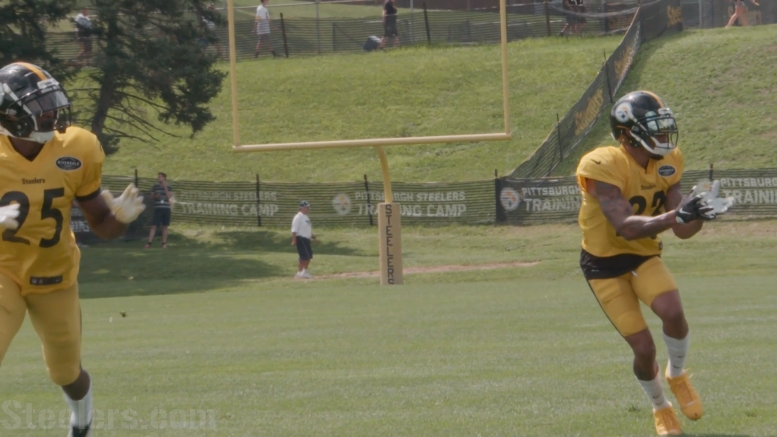 A lot of people have given up on Artie Burns or have been very discouraged in him. But the Pittsburgh Steelers fourth-year cornerback has always had at least one person in his corner, and that is his fellow cornerback, starter Joe Haden. Haden was the starter opposite Burns for the latter’s only season in which he started all 16 games.

Haden has frequently stuck up for Burns and expressed confidence in his abilities and his ability to get things back on track. He was thrilled for him late in the year in 2018 when the team was giving him another chance, only to abandon that plan a few snaps into the game.

Even after spending most of the second half of last season riding the bench—after the Steelers chose not to pick up his fifth-year option—Burns still has Haden behind him, through thick and thin, believing in his talent and his ability to reorient himself.

“He’s getting it back. He’s coming in here focused, locked in and he’s doing the little things”, he told Kevin Gorman of the Pittsburgh Tribune-Review of the younger former starter. “He’s starting off with his stances and hand placement – because he’s a great press corner: he can run with the very fastest and has athletic ability. It’s just believing in yourself and going back to the basics”.

He would be a much better press corner if he can figure out to consistently use the correct hand to press the wide receiver near the line of scrimmage, which has been an unusual problem to have. Re-establishing fundamentals can come first, before getting back the confidence necessary to play the position.

“He wants to do better”, Haden said. “He understands it’s about your play on the field. These coaches are going to be blatantly honest with you about what you do well, what you don’t do well and what you can do to do better for the team. It speaks a lot to him. Artie is just showing that he wants to be here and be the best he can be”.

Burns spent most of OTAs running with the first-team defense because Haden was given that time off as an established veteran. But also because it was an opportunity for the Steelers to give Burns those looks. Both for his own sake and for theirs.

As Haden enters the summer hoping to push for a lucrative contract extension, Burns will just be trying to make it one step at a time. The first step is to make it to Latrobe, then hang on there long enough to earn his roster bonus. From that point on, he has to work to earn a roster spot.

The Steelers have not been idle in waiting for him. They signed Steven Nelson in free agency to start, and then they used their second pick in the third round to draft Justin Layne. With Mike Hilton and Cameron Sutton also in the mix, it’s a crowded group at least five men deep without him.