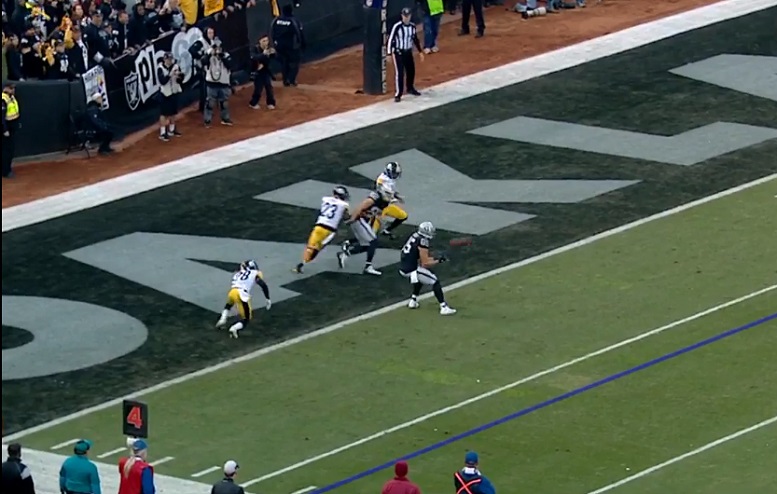 While nearly all defensive backs are likely taught to have short memories at all levels of organized football, it’s probably hard for most to totally forget about certain plays that they either made or failed to make in a game. Pittsburgh Steelers cornerback Mike Hilton is probably a good example of that when it comes to the latter.

During the team’s offseason practices earlier this month, Hilton easily recalled the late touchdown reception he gave up to Oakland Raiders tight end Derek Carrier in the team’s devastating Week 14 road loss as a play that he knows he could’ve done a better job on.

“I tried to do too much and it caused us to have a big loss,” Hilton recalled earlier this month, according to Mike Prisuta of steelers.com, of that fourth-and-goal from the Steelers’ 6-yard line with 25 seconds left in regulation and the Steelers clinging to a 21-17 lead.

On the play in question, which you can see below, Carrier, a seldom-used tight end for the Raiders, was lined up inside the numbers, but the widest to the left side. At the snap of the football, Carrier initially broke for the corner but then sat down and broke back the angle route to the inside and just outside the goal-line. He was wide open as a result of Hilton overplaying the initial outside release and Raiders quarterback Derek Carr hit his tight end for the easy go-ahead and game-winning touchdown.

The Steelers nickel cornerback also told Prisuta that he thought he had recognized the route concept run by the Raiders on that particular play and responded accordingly.

It’s hard to know for sure what Hilton saw on tape ahead of that game against the Raiders that led to him overplaying the outside release by Carrier on that Raiders touchdown, but a quick search of NFL Gamepass revealed that Oakland had ran that same play at least two other times in their previous games against the Denver Broncos in Week 2 and in Week 8 against the Indianapolis Colts. On both of those previous plays, which you can also see below, Carrier ran the same route.

While looking back at that game-winning touchdown that he gave up against the Raiders is fruitless at this point, Hilton did vow earlier this month to be a better prepared player in 2019. After all that was just one bad play that he now needs to learn from and move forward from.

“I’m focused on what I can do, what’s going to help the team win and what can I do to better myself as a player,” Hilton said.