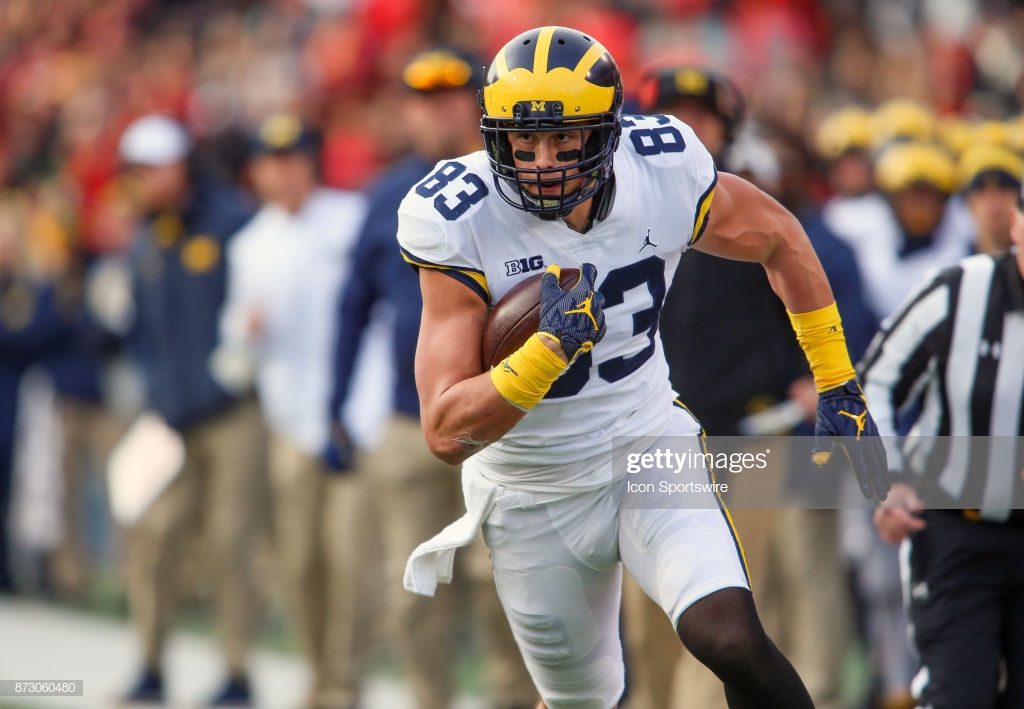 The advent of spread offenses has led to the traditional tight end position to be pushed to the back burner in college football.  Three receiver and 4 receiver sets has become the norm.  This brings production down and projection to the forefront.

In just 10 years the overall numbers for TE’s has dropped precipitously. Look at some of the numbers from 2008:

With usage being down, players are not asked to do as much as they were in the past and a lot of TE’s often come into the NFL with a limited route tree.

Enter Pittsburgh Steelers 5th round pick Zach Gentry (#83). A converted QB we can expect there to be some growing pains both as a receiver and a blocker. There will be plenty of work to be done in both those area but I wanted to see if his route tree was limited. Can he only be used on certain routes or certain levels? Here are examples of how he was used.

Screen – Set up on the left wing he engages the rusher and sells the block. Makes a hands catch and gets upfield quickly. Going outside may have been a better option but a solid gain.

Drag – From the left wing he’s comes down the LOS like he’s going to slide block and releases into the flat. Hands, away from his body, and gets some additional yardage.

Shallow Cross – He’s in a 2 pt stance in the tight slot right, he gets a clean release across the field. A nice adjustment behind and he add 17 yards after the catch.

Flat – From the right wing, a simple flat route.  Gets his head around, out in front and solid gain to the first down marker.

Out – From the Y position on the right side, it’s an out route. He route running will need some improvement but he uses a little push off at the stem and catches the ball away from his body.

Dig – From the wing on the left side it’s the deep in route. He uses and outside release and is able to keep the DB to his outside giving him room to separate to the inside.

Curl – From a 2 point stance on the right. A simple curl route finding the soft spot in the middle of the Zone. Make the catch and wastes no time getting upfield.

Stop/Hitch – Lined up wide right he accelerate to sell the deep route. Uses his hands to create space at the top and goes low to make the catch.

Post – Set up as the Y on the left end of the LOS. He’s going to press out, give a quick fake to help create separation and shows good range out in front to make the catch.

Corner – From a three point stance on the right side of the LOS.  He releases and bumps the OLB through the stem. Shows good hands and ability to track the ball to go up and get it.

Drive – The deep crossing route from the right side of the LOS. He brushes off the ILB jam and heads for the far sideline. Makes a nice adjustment to the ball for a good gain.

Out and Up – From the right wing, he heads to the flat and sells it well getting his head to the QB before breaking upfield to make a contested catch.

Go/Seem – In at two point stance in the tight slot on the route. One of his better routes. He uses a hesitation to break to the outside while using a swipe to avoid the DB jam.  He gets a step on the defender and makes a great adjustment behind him for the big gain.

If you’re following along, that was pretty much the entire route tree.  Jim Harbaugh and the coaching staff at Michigan used him just about every way you’d like to see.

His route running is raw and that’s to be expected but he shows some comfort using strength at the top of the stem to create separation.  He’s not dynamic after the catch but gets what he can and I was encouraged to see just how little he used his body to make the receptions. He did have a rough game against Ohio State with three drops and seems to struggle with balls below his waist but shows a good catch radius and ability to adjust up, in front and behind him.

Admittedly, I wasn’t a fan of the pick when it was made but I am much more comfortable with it now.  I’m very intrigued to see what tight end coach James Daniel can do to help his development as a receiver and a blocker. On that note, I didn’t think his blocking was as bad as some other may believe. There’s promise there.