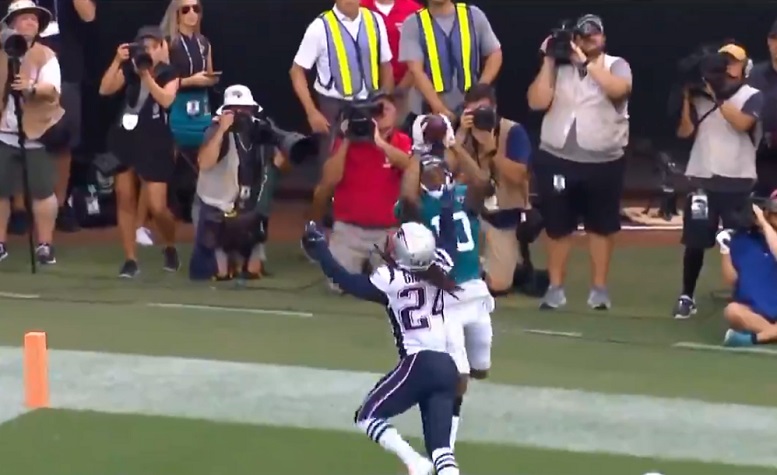 The Pittsburgh Steelers signed veteran wide receiver Donte Moncfrief during free agency and the Mississippi product is now expected to help fill the shoes left behind by wide receiver Antonio Brown when he was traded back in March. Recently I was asked by a reader to identity Moncrief’s top five catches last season when he was with the Jacksonville Jaguars and recap each and here are below are my findings after reviewing all of his 48 receptions from the 2018 regular season. All of these catches are in the order that they happened last season as well.

This first catch I identified as being one of Moncrief’s top 5 from last season came in Week 2 against the New England Patriots with cornerback Stephon Gilmore in coverage. This was an obvious end zone fade and Moncrief does a great job of going up and getting the football over the top of Gilmore, who has his back to throw.

In the Jaguars Week 4 game against the New York Jets, Moncrief registered a deep pass reception down the right sideline for a touchdown against cornerback Trumaine Johnson. At the snap, Moncrief got a free release to the outside and when Johnson turned to locate the football and got himself out of phase, the wide receiver extended his left arm to make sure he achieved maximum separation and stacked the cornerback. After making the catch, Moncrief easily wins the race to the end zone.

Against the Colts in Week 10 we once again saw Moncrief win down the field and ultimately turn his reception into a long touchdown. On this 3rd and 3 play, Moncrief runs a corner route out of the slot after first selling a deep post at around the 15-yard mark. Moncrief’s quick nod at the top of his route held the lone deep safety just enough and even with the Colts slot cornerback Arthur Maulet in close trail at the breaking point of the route, the wide receiver is able to gain nice separation and make a nice over-the-shoulder reception. Moncrief breaking the tackle attempt by the safety is the icing on the cake on this play and it results in another long touchdown for the wide receiver.

Against the Bills in Week 12, Moncrief once again registered another deep reception and this time it was down the left sideline against man-coverage. At the snap, Moncrief once again got a relatively free release and while the football was a little bit under-thrown, he was abe to adjust to the pass in the air and ultimately able to go up and make the catch over the top of his defender’s tight coverage that included a hand up high in his face. This was easily Moncrief’s best contested catch of the 2018 season.

In the Jaguars Week 14 game against the Tennessee Titans, Moncrief showed great body control along with the ability to beat tight coverage from cornerback Adore Jackson on the outside on what amounted to be a 10 yard reception via a curl route early in the game.