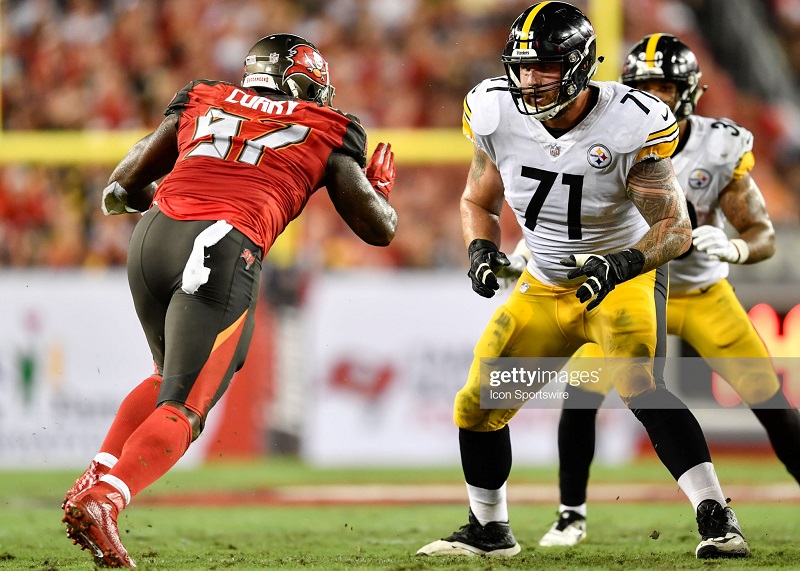 After losing starting right tackle Marcus Gilbert to a lower leg injury early last season, the Pittsburgh Steelers turned to former undrafted free agent Matt Feiler and the Bloomsburg University product went on to start 10 games in total. Feiler represented himself well overall as the team’s starting right tackle in the roughly 675 total offensive snaps that he played and with Gilbert no longer on the team, he reportedly opened of this year’s offseason practices as a starter. During an interview last week on Steelers Nation Radio, Feiler was asked about how it feels to have opened up OTAs as the team’s starting right tackle.

“Oh, it sounds good, but there’s still a lot of work to be done and, you know, always looking to get better and do whatever I can to help out the team,” Feiler said.

Despite is strong showing last season at right tackle, Feler, who was re-signed this past offseason to a one-year contract as an exclusive rights free agent, knows he has a lot of room from improvement and he noted one specific area of his game that he’s been focusing on since the 2018 season ended.

While Feiler’s overall strength has been an asset to him as an offensive lineman so far during his NFL career, he also recognizes that better hand usage moving forward will also help him become a better overall player.

“That’s something that I’ve been working on is my hands and just the placement and the speed that I’m trying to throw them out there,” Feiler said. “You know, it’s something that’s starting to come together a little bit.”

Feiler’s overall position flexibility is likely one reason why he was originally able to stick with the Steelers since he was originally signed to the team’s practice squad in September 2015. In fact, last year during the preseason, Feiler played 108 total snaps at left guard and 25 more at center. That’s right, none of his preseason snaps came at tackle. Because of all the playing time he’s previously seen at guard, Feiler was asked last week if he has a natural affinity for either that position or tackle.

“You know, I don’t know,” Feiler told Craig Wolfley. “If you asked me last year, I would have definitely said guard, but it’s something that, I mean, as you get more time at the position, you know, I don’t prefer one over the other.”

While Feiler did open this year’s OTAs as the team’s starting right tackle, there’s no guarantee he’ll hold that spot on the depth chart throughout the summer as he figures to face a tough challenge from two of the team’s former draft picks, tackles Chukwuma Okorafor, a rookie last season who started one game, and Jerald Hawkins, who spent all of last season on the Reserve/Injured list with a quadriceps injury. During his interview last week, Feiler was asked about the progress that Okorafor and Hawkins have both made so far this offseason starting with the former.

“He’s young, you know, but he’s learning very quickly and, you know, he’s doing a good job,” Feiler said of Okorafor, who was selected by the Steelers in the third-round of the 2018 NFL Draft. “He’s athletic, he’s big, so yeah, I mean, he’s putting in a lot of work and it’s showing.”

Feiler was then quickly asked to comment on what he’s seen out of Hawkins, who was selected in the fourth-round of the 2016 NFL Draft, so far this offseason as he battles back from yet another injury.

“Hawk, he’s coming off the injury from last year, but, you know, he looks like he’s getting stronger and stronger every day and he’s looking good,” Feiler said.

We’ll now sit and wait and see how the battle for the Steelers starting right job for the start of the 2019 regular season ultimately plays and if Feiler can ultimately keep the spot all summer. If for some reason Feiler doesn’t wind up holding on to the starting job, he still figures to make the 53-man roster once again as a backup and a backup at more than one position. He certainly was a great find by the Steelers several years ago.

“It’s going to be whoever has the better play,” Feiler said of his summer position battle on Wednesday, according to Ray Fittipaldo of the Pittsburgh Post-Gazette. “It’s up for grabs. It will be a tough battle.”