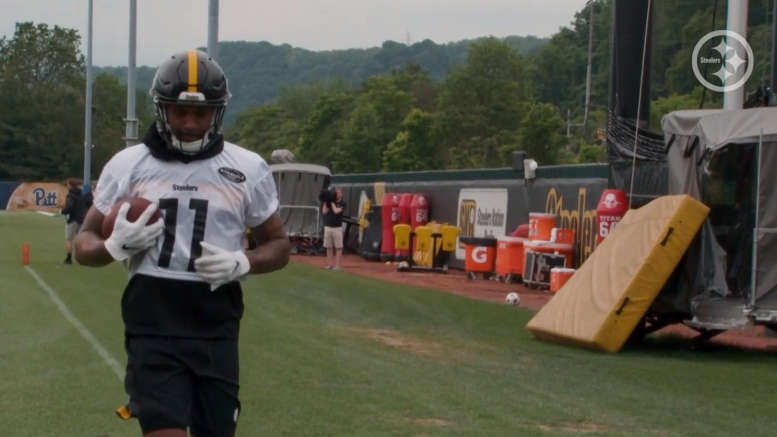 The signing of Donte Moncrief earlier this offseason was largely met with non-plussed reactions. Moncrief? What has he done? Isn’t he replacement-level at best? Maybe he started off pretty well but he hasn’t done much at all lately, right?

But now with the Pittsburgh Steelers for his sixth season, Moncrief has been one of the players drawing the most rave reviews so far this offseason. Now, that is going to be biased a bit by the fact that he is a veteran, more than most players on this team, and so this part of the year should largely be autopilot for him. but it goes beyond that.

Right now he is shaping up to having a starting role, which shouldn’t be too surprising given the contract that he signed. And to that end, he has been working a lot on building a relationship, both on and off the field, with the person who is now most important to him professionally: quarterback Ben Roethlisberger.

Having already been a part of the trip to Georgia, of course, which also included on-field work, the two of them have made it a priority to get extra time in together to work on their connection, knowing that it’s going to be an important part of the Steelers’ season.

Moncrief will be a crucial veteran presence in a very young wide receiver room that includes third-year 22-year-old JuJu Smith-Schuster at the helm, along with second-year James Washington and rookie Diontae Johnson.

Even though he is new to the team, he has had more experience in the game than anybody else among the wide receivers, and nearly all the skill position players aside from Vance McDonald. He also knows what it’s like to work with different quarterbacks, systems, and teams, so he is not in unfamiliar territory and that should aid him in contributing immediately.

“I wasn’t really sure what to expect when he came in”, Roethlisberger previously said about Moncrief. “I didn’t know him and now just getting to see his work ethic, the type of person he is, his desire to be great, his knowledge of the offense already. We’ll do no-huddle stuff and I’ll give him a signal and I’ll be like, ‘you good?’ and he’ll be like, ‘yeah’. He is in with coach Drake every single morning, pretty much all day”.

There’s really no better way to get on the field than to get in good with your franchise quarterback, and Moncrief has clearly done that so far. Will they pick up where they left off in training camp? Can he stay ahead of the young guys around him? That’s what remains to be seen.