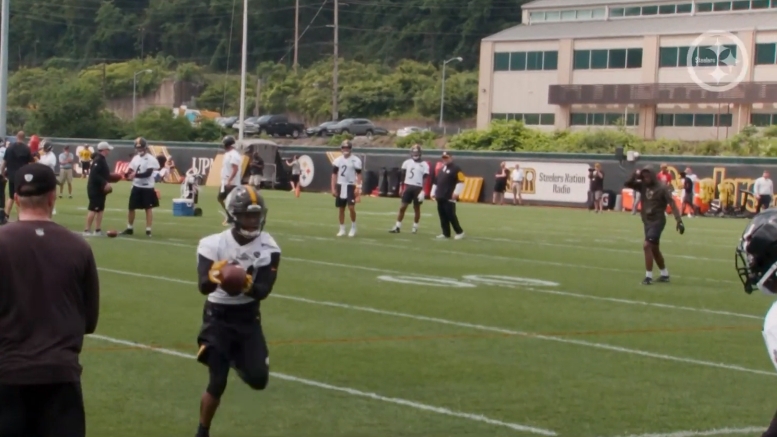 Here’s a slightly interesting tidbit: it’s hard to discern the extent, but according to Pittsburgh Steelers wide receiver Diontae Spencer, he has gotten some work with the first-team offense so far this spring. It’s unclear if that means Ben Roethlisberger was throwing the ball, as Mason Rudolph and Joshua Dobbs have gotten first-team snaps as well, but he said that he has worked with players like JuJu Smith-Schuster.

Spencer was originally signed by the Steelers as a Reserve/Future signing at the beginning of January after Pittsburgh was officially eliminated from qualifying for the postseason and their regular season ended. A former undrafted free agent from many years ago, he has carved out a successful career in the CFL, and is now hoping to find an opportunity back in the States.

Even after the Antonio Brown trade, Spencer was still not a name on most people’s radar. Not only did the Steelers retain Smith-Schuster, James Washington, Ryan Switzer, and Eli Rogers, they added Donte Moncrief in free agency and then added another Diontae in the draft, going for Toledo’ Diontae Johnson.

In terms of professional experience, however, Spencer and Moncrief overshadow everybody else, even if Spencer’s time has come up north. Working in a professional environment still counts for something, and CFL returnees who actually have the talent to play in the NFL have had seamless transitions.

In that regard, then, perhaps it’s not much of a surprise if he has gotten some snaps with first-team personnel, though it certainly was not handed to him. We have previously heard earlier in OTAs that he was turning some heads by making plays, including a pair of touchdowns in one session.

The fact that he is also capable of serving as a return man makes him an interesting darkhorse candidate to make the 53-man roster, in competition with others like Rogers and Switzer who could also serve in that capacity.

Yet Spencer, in spite of his slight frame a 5’8” and 180 pounds, says that he has been working on the outside, so he shouldn’t be pegged as some shifty slot receiver, either. Ideally, of course, he will be able to play at any wide receiver position, as the Steelers more than most teams thrive on that variability.

While garnering some attention for yourself in OTAs is by no means a bad thing, however, it must be pointed out that there is a long road to hoe between now and the start of the regular season. That means that a lot of hard work and continued progression must be made, but it also means that there is time to get it done. Will he be the first CFL player since Stefon Logan to make the team?