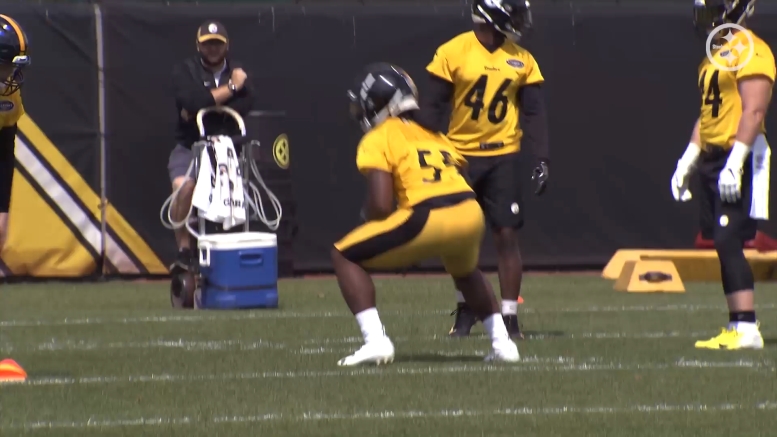 It hasn’t necessarily been seamless, but rookie linebacker Devin Bush’s transition to the pros probably hasn’t been far from it. The only complaint that we have heard about the Pittsburgh Steelers’ highest draft pick in over a decade and a half is that he could stand to be a little louder and authoritative when he is calling the defense with the first-team group.

I’ll take that any day for a rookie in May and June. And he’s already feeling like he belongs.

“I feel like I’m a part of it now”, he told reporters at the start of minicamp, according to Brian Batko. “But once it actually becomes football, when we put the pads on and we start testing, you know, the real things about football, that’s where I think I flourish the most”.

There isn’t a ton of difference between OTAs and minicamp, so expectations don’t change drastically from one to the other. Training camp is, of course, when things start to pick up for everybody, and rookies might start to fall off a bit.

That wasn’t a problem for T.J. Watt in 2017, however, and Terrell Edmunds had slow, steady progress throughout his rookie training camp as well a year ago. There’s nothing suggesting that Bush isn’t likely to have a similarly prosperous transition into the Latrobe life.

A common denominator between all three of the Steelers’ most recent first-round picks is, of course, that they come from NFL families, so they all have had siblings or parents, if not both, on whom they could rely on for advice about what it takes to be a professional.

No matter how much good counseling you might receive, however, there is no experience like first-hand experience, and you can never be fully prepared for life in the NFL until you are living it yourself. Bush said that simply the acclimation process itself “was probably the biggest adjustment” for him.

“Just getting acclimated was probably the biggest adjustment for me”, Batko quoted him as saying. “I’ve been on the grind since I started the whole pre-draft process, so now that I’m actually here, my mind had to flip to, ‘okay, this is a job. This is where I’m going to be at, so let’s get started’”.

Now that he has the mindset right about his profession, he has set himself to the task of demonstrating that he is the man for the job that the Steelers believed he would be when they made an out-of-character trade up in the draft to go and get him.

And that includes not just what he brings on the stat sheet, but also off the field, in the classroom, in the locker room, and before the snap. Bush is being instantly groomed for something of a leadership role that he’ll have to grow into over time, but it seems he doesn’t plan on taking too long to get there.