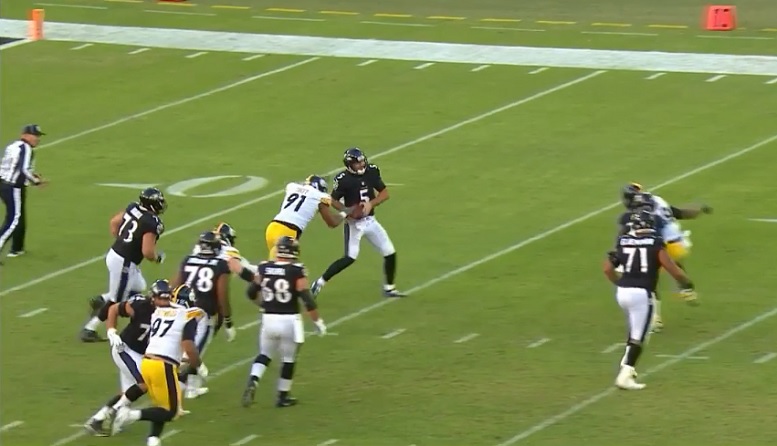 We’ll now move this series along once again by looking at and contextualizing the five and a half sacks that Steelers defensive end Stephon Tuitt registered during the 2018 season.

Against the Cincinnati Bengals in Week 6, Tuitt recorded his first sack of the 2018 season on a 2nd and 8 play in the fourth quarter. On this particular play, Tuitt comes off the snap to his left and when the right guard over sets to his own right, the Steelers defensive lineman uses his hands to help himself work back to the inside A-gap and through it for the sack of Bengals quarterback Andy Dalton.

In the fourth quarter of the Steelers Week 8 game against the Cleveland Browns, Tuitt registered his second sack of the season on a third and 3 play. At the snap of the football, Tuitt works way to the left outside from a standing position as part of a stunt. With the coverage down field being good, Browns quarterback Baker Mayfield is forced to hold on to the football after working through two reads from his left to the middle of the field. Pressure from Tuitt around the edge forced Mayfield to escape the pocket to his left and before he can get rid the football, the quarterback is taken down to his knees by Tuitt.

Late in the fourth quarter of the Steelers Week 9 game against the Baltimore Ravens, Tuitt registered his third sack of the season on a second and 10 play. At the snap of the football, Tuitt stunts to the outside again behind outside linebacker T.J. Watt, who spun inside. The deep pocket penetration provided by defensive lineman Cameron Heyward pushing the ravens left guard back forces Baltimore quarterback Joe Flacco to leave the pocket to his left. Tuitt then works himself around the right guard, who had attempted to carry him to the edge on the stunt. Tuitt is able to get to Flacco before he’s able to get rid of the football.

In the first quarter of the Steelers Week 14 game against the Oakland Raiders, Tuitt registered his fourth sack of the season on a first and 15 play. At the snap of the football, comes ff to his left and easily uses his hands to force the Oakland right tackle down to the ground after a bad effort on his part. After quickly working through his first few reads from left to right, Raiders quarterback Derek Carr is a sitting duck for Tuitt.

Late in the third quarter of the Steelers Week 16 game against the New Orleans Saints, Tuitt registered his fifth sack of the season on a second and 16 play. At the snap of the football, Tuitt attacked the A-gap and was able to slip past the right guard and then cross the face of the center while he was engaged with Heyward to get access to Saints quarterback Drew Brees after he had stepped up in the pocket to his left. It being third down and long is what likely led to Brees holding the football as long as he did on the play and that certainly helped buy Tuitt a little extra time to work through two blockers.

Later in the first quarter of the Steelers Week 17 home game against the Bengals, Tuitt registered a half a sack along with outside linebacker Anthony Chickillo on a first and 10 play. This sack, however, is mainly a result of Steelers inside linebacker L.J. Fort quickly beating a half-hearted block by the Bengals wide receiver on the edge before he released to the flat. Fort’s pressure of Bengals quarterback Jeff Driskel forced an attempted escape to the left side of the offense. Chickillo, who had rushed up the edge from the right outside linebacker spot on this play, easily recognized the attempted quarterback escape and quickly disengaged from the Bengals left tackle to retrace his path and sack Driskel along with some assistance from Tuitt. The Bengals drive stalled after two more plays.

Summary: Tuitt’s 5.5 sacks in 2018 mostly showed that defensive lineman can work both to the inside and around the outside in order to provide quarterback take-downs. However, it’s worth pointing out that most of Tuitt’s sacks in 2018 came at least 4.75 seconds after the football was originally snapped. Only one, his first one of the season against the Bengals, was a result of a quick one-on-one win. Tuitt probably could have had a few ore sacks in 2018 had he been able to finish plays and that’s something he’s said this past offseason he’s concentrating on doing during the 2019 season. While obviously not as good of a pass rusher as Heyward, Tuitt does have the tools necessary to provide an 8-sack season and especially if he can get regenerate 5 or so coverage-type sacks lack he had during the 2018 season.