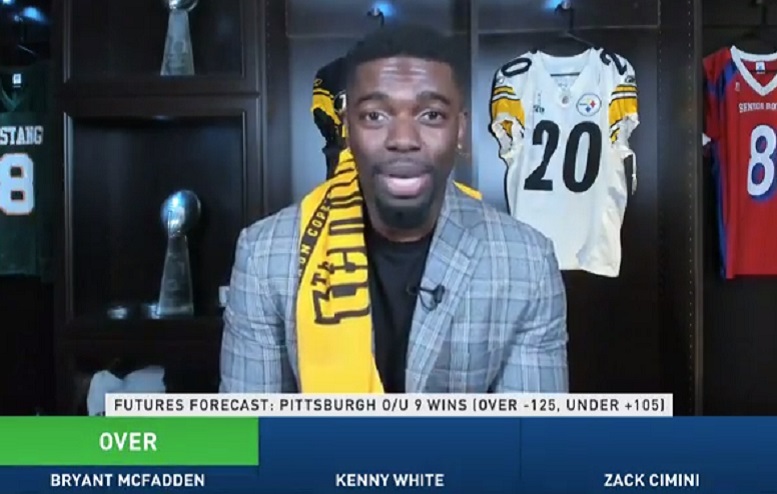 Currently, several online sportsbooks have the Pittsburgh Steelers over/under win total for the 2019 regular season set at 9 and the teams former cornerback Bryant McFadden considers that number to be an easy money bet.

During a Thursday appearance on CBS Sports HQ, McFadden, an NFL analysts for the outlet, explained which side of that 9 win total people should bet on concerning the Steelers and why.

“So, go ahead and print your t-shirts now. Yes, take the over. Looking at the schedule, they have, what, three long west coast trips out west to Arizona, to L.A. and to San Francisco. As long as they’re not playing Oakland in Oakland, book the Pittsburgh Steelers. If you want to add a little more sauce to your fire, go ahead and put something on them. Superbowl odds? What? Plus 2,500 and divisional, plus 180? Book it, print the t-shirts. Over.”

How’s that for a guarantee? McFadden might obviously be a little bit biased when it comes his former team, but at least his reasoning for saying why bettors should take over 9 when it comes to Pittsburgh wins in 2019 is pretty sound.

The Steelers 2019 regular season, as McFadden made sure to point, does include three games out west against the San Francisco 49ers, Los Angeles Chargers and Arizona Cardinals. They should definitely be expected to beat the Cardinals late in the season and if they can win one of those two other games against either the 49ers or Chargers, and then go no worse than 4-2 in their own division, that means they’ll only need four more wins against New England Patriots, Seattle Seahawks, Miami Dolphins, Indianapolis Colts, Los Angeles Rams, Buffalo Bills and New York Jets to hit 10 wins.

As for McFadden declaring that linebacker Devin Bush, the team’s first-round draft pick this year out of Michigan, will be the NFL’s 2019 Defensive Rookie of the Year, that’s a bold proclamation for sure. That said, if Bush ultimately winds up being a Week 1 starter for the Steelers, something he appears to be on course to do right now, he’ll definitely have a legitimate shot to win the 2019 Defensive Rookie of the Year award. That award was last won by a Steelers player in 2001 when linebacker Kendrell Bell accomplished the feat.

As for McFadden’s 2019 win total over/under thoughts for the three other AFC North teams, he has the Cleveland Browns as under 9 wins, the Baltimore Ravens as over 8.5 wins and the Cincinnati Bengals as under 6 wins. You can see his explanation for each of those three teams in the videos provided below.

#Browns fans should be excited about OBJ and the new team, but it might be a rough first two months @CBSSportsHQ @CBSSports @SportsLine pic.twitter.com/oYaSxyYejs

Improvements for @Lj_era8 and the #Ravens offense but the defense may take a step back. @CBSSportsHQ @CBSSports @SportsLine #Ravensflock pic.twitter.com/Z7uhDAYL34

Expect the #Bengals to have a lot of issues for this rebuilding year. How many games do you expect Cincy to win? @CBSSportsHQ @CBSSports @SportsLine pic.twitter.com/JTETtfC7lw