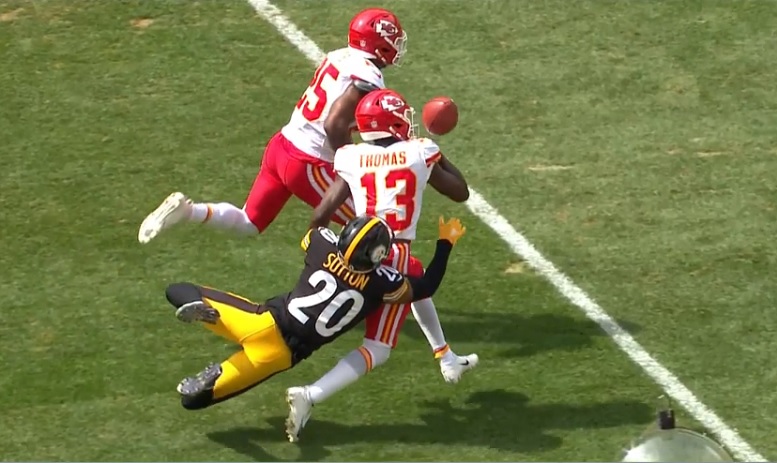 The Pittsburgh Steelers only managed to register 15 total takeaways during the 2018 season and that number was obviously extremely disappointing. While we have already pointed out on this site several times the interceptions that the Steelers defense missed out on in 2018 via drops, we’ve yet to write or talk much about the several fumbles that weren’t ultimately able to be corralled by that unit as well during the season.

In total, the Steelers missed out on 8 fumble recoveries last season and below is a look at each of those plays in addition to a description of what happened and what a potential result of a fumble recovery would have been.

What Happened: The Steelers first failed fumble recovery of the 2018 season came during the team’s Week 1 game against the Cleveland Browns and on what would ultimately be the final play of the first half. On this play, Steelers outside linebacker Bud Dupree strip-sacked Browns quarterback Tyrod Taylor during a 2nd and 16 play and unfortunately a Cleveland player was able to recover the loose football.

Potential Result: Had the Steelers defense been able to recover this strip sack fumble caused by Dupree, the clock would have been stopped on the change of possession. The Steelers offense would have then had the football inside Browns territory with a little less than 30 seconds remaining to go along with one timeout in hopes of at least getting in field goal range to end the first half. Such a field goal would have given the Steelers a 10-0 halftime lead. This game ultimately ended in a 21-21 tie so getting that extra field goal before halftime could have been pretty big.

What Happened: Early in what would ultimately be a Steelers Week 2 loss to the Kansas City Chiefs, the Steelers were forced to punt from inside their own 20-yard-line. After fielding the directional punt from Steelers punter Jordan Berry, Chiefs wide receiver De’Anthony Thomas broke free down the sideline for a long return before finally having the football briefly knocked out of his control from behind by Pittsburgh cornerback Cameron Sutton, who had initially been blocked well out of bounds earlier during the return. Sutton knocked the football loose from Thomas’ control at around the Steelers 25 yard-line and it unfortunately never hit the ground. Thomas was eventually tackled at the Steelers 10 yard-line.

Potential Result: Had this loose football ultimately hit the ground and been recovered by the Steelers it would have been a big reboot to the start of the game with the Pittsburgh offense going back on the field again after a quick opening drive three-and-out. Instead, the Chiefs had a short field to work on for their opening possession and it took them just two plays to have a 7-0 lead thanks to the great field position that Thomas provided via his long punt return.

What Happened: Early in what would ultimately be a Steelers Week 9 win over the Baltimore Ravens, the Steelers defense missed out on yet another loose football. This time, however, it was a potential gift provided by Ravens rookie quarterback Lamar Jackson as he fumbled the football in his attempt to pull it out of the belly of running back Glen Edwards as Steelers outside linebacker T.J. Watt was bearing down on both offensive players. Edwards was able to pounce on the loose football prior to Steelers inside linebacker Vince Williams and the Ravens offense thus maintained possession.

Potential Result: While the Ravens offense would eventually stall three plays later after the fumble, the Steelers defense missed a golden opportunity to provide the Pittsburgh offense great field possession for their opening drive. Instead, the Steelers offense started on the team’s own 20 yard-line following a Ravens punt that went into the end zone for a touchback, The Steelers, as previously mentioned, did go on to win this game against the Ravens 23-16, however.

What Happened: Later in the second quarter of what would ultimately be a Steelers Week 10 blowout win over the Carolina Panthers, Watt strip-sacked quarterback Cam Newton after being allowed to rush from the left side uncontested. While the loose football did bounce back toward the middle of the field, Panthers running back Christian McCaffrey was ultimately able to beat Steelers defensive end Stephon Tuitt to it. The Panthers ultimately had to punt three plays later, however.

Potential Result: This potential turnover would have give the Steelers offense the football at the Panthers 42 yard-line with plenty of time left in the first half to get even more points. at the time of this fumble the Steelers lead the Panthers 31-14, so missing out on this particular opportunity wasn’t very hurtful overall.

What Happened: In the third quarter of what would ultimately be a Steelers Week 11 close win over the Jacksonville Jaguars, Watt registered another strip-sack and this time his victim was quarterback Blake Bortles. The loose football, however, was quickly gobbled up by a Jaguars offensive lineman and with this being a third down play, a Jacksonville punt then followed.

Potential Result: The Steelers trailed the Jaguars 9-0 at the time of this strip-sack by Watt and obviously the team’s offense would have been set up way inside the Jacksonville red zone had a defensive player of theirs been able to recover the loose football. The Steelers ultimately fell behind the Jaguars 16-0 before finally mounting a comeback that was culminated with a very late touchdown run by quarterback Ben Roethlisberger with 5 seconds left in regulation time.

What Happened: In the third quarter of what would ultimately be a Steelers Week 16 loss to the New Orleans Saints, Pittsburgh cornerback Joe Haden stopped running back Mark Ingram from getting into the end zone on a first and 8 play from the Steelers 8 yard-line. During the tackle attempt, Haden was able to rip the football loose from Ingram and it landed harmlessly out of bounds and the run went into the books as a 7 yard gain. The saints scored two plays later to take a 24-14 lead.

Potential Result: This fumble could have been a huge turning point in this Week 16 game had the lose football went through the end zone and then out of bounds instead of going out of bounds at the Steelers 1 yard-line. A touchback would have issued and the Steelers offense would have taken the field at their own 20 yard-line training 17-14 with roughly 10 minutes left in the third quarter.

What Happened: Watt struck yet again in the Steelers regular season finale against the Cincinnati Bengals. On this designed second quarter keeper by Bengals quarterback Jeff Driskel crashes down the line behind the play and ultimately registers a forced fumble thanks to a nice tackle. The loose football, however, was ultimately recovered by a Bengals offensive lineman

Potential Result: The Steelers defense being unable to recover the forced fumble by Watt kept the Bengals drive alive. That drive culminated with a field goal jut a few plays later to give the Bengals a 10-0 lead.

What Happened: Watt even caused yet another fumble against the Bengals in Week 17 and this one, a strip-sack of Driskel, came early in the third quarter. One again, however, the Bengals were able to retain possession of the football as Driskel was able to quickly locate it and fall on it at the Cincinnati 12 yard-line and a punt followed on the next play.

Potential Result: The Steelers trailed 10-3 at the time of this Bengals fumble and obviously more points would have likely followed very quickly had the defense been able to recover the loose football that Watt created. Instead, the Bengals punted the football to the Steelers and the Pittsburgh offense ultimately went three-and-out on the ensuing drive.