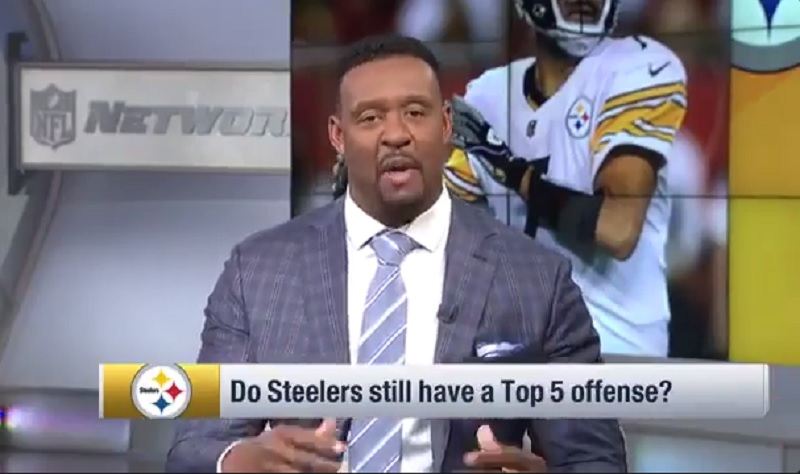 How will the Pittsburgh Steelers offense perform in 2019 with wide receiver Antonio Brown now gone? I would have included former running back Le’Veon Bell in that question as well but the Steelers offense was without him all last season and that unit still performed well, outside of the 26 total turnovers. So, can the Steelers offense be a top 5 performing unit in 2019? While I think that’s certainly a possibility as long as quarterback Ben Roethlisberger remains healthy, former NFL player Willie McGinest, who is now an analysts for the NFL Network, said a few days ago during a segment that the Steelers offense has no shot at being a top 5 unit in 2019 and especially with Brown and Bell both no longer being on the team.

“Absolutely not,” McGinest said when asked if the Steelers can have a top 5 offense in 2019 without Brown and Bell. “And I think they’re still a really good offense, but maybe a top 10, top 20 but not a top 5. And you mentioned A.B., you mentioned Lev Bell, what’s important about that is, the last time they were on the field, 50% of the touchdowns went through A.B. and Lev Bell.”

Willie on the #Steelers offense and if they're still a Top 5 unit. pic.twitter.com/WBgQKPSc2E

McGinest basing his argument that the Steelers offense won’t be top 5 in 2019 because of total combined touchdowns scored in 2017 by Brown and Bell is silly. After all, that was two freaking years ago. Additionally, while Brown led the Steelers in total touchdowns last season with 15, running back James Conner wasn’t too far behind him with 13. Oh, and Conner missed three-plus games with an ankle injury while Brown missed one with a sprained ego.

In the later part of his reasoning for saying the Steelers absolutely won’t have a top 5 offense in 2019, McGinest pointed to that unit not potentially having an offensive player that can beat other teams should there wind up being a huge focus from opposing defensive coordinators of completely taking away wide receiver JuJu Smith-Schuster.

“So, now, okay JuJu, you’re the number one guy, we all understand that, but if I’m a defense of coordinator and I’m game planning against the Pittsburgh Steelers, I’m double teaming JuJu and I’m loading the box,” McGinest said. “I want to see who’s going to beat me. Who on the outside? Is it Eli Rogers, is it Ryan Switzer? Who is it? Is it James Conner? James Washington? Okay, but he’s still young, he’s going into his second year. So, if I’m game planning and you’re looking at the production those two guys had that walked out the door, now teams and defenses are going to gameplan a little bit different. How are you going to generate those explosive plays when you take away the number one guy, which right now is JuJu?”

That part of McGinest’s argument against the Steelers possibly being a top 5 offensive unit in 2019 is a lot better than the previous one that was centered around total touchdowns. It’s understandably for any fan or analyst to wonder if the Steelers can produce yards and more importantly, points, should Smith-Schuster be shut down completely in a few games this coming season. That said, it certainly appears as though Conner’s nearly 1,500 total yards from scrimmage that he had last season in just 13 games is being overlooked by McGinest.

While he’ll certainly not be confused for Brown, new Steelers wide receiver Donte Moncrief, who was signed during the start of free agency, might be able to have a career year in 2019 with Pittsburgh as long as he and Roethlisberger both stay healthy. For God’s sake, Moncrief registered 48 receptions for 668 yards and 3 touchdowns last season with the Jacksonville Jaguars and with quarterbacks Blake Bortles and Cody Kessler throwing him the football. I’m pretty sure that Roethlisberger is a much better quarterback than those two scrubs.

And while Steelers second-year wide receiver James Washington is indeed still young and inexperienced, is there currently anybody reading this post who doesn’t think he’ll at least double his rookie stats in 2019? If he cant catch 32 passes for 434 yards and a touchdown in 2019, it will be super disappointing.

Sure, the Steelers passing game might take a step backwards overall in 2019, and especially when it comes to total yards, but that might be more of a result of the offense not having to navigate such long fields like they had to predominately do during the 2018 season. Additionally, as good as the Steelers offense was at times last season, the unit still turned the football over 26 times in total with 16 of those being interceptions thrown by Roethlisberger. Merely cutting down those turnovers by a third in 2019 will do wonders for the Steelers offense.

If McGinest and others are worried about the Steelers now being extremely young and inexperienced at the wide receiver position in 2019 with the likely likes of Smith-Schuster, Moncrief, Washington, Ryan Switzer, Eli Rogers and rookie Diontae Johnson, perhaps a quick glance at the New Orleans Saints individual stats from last season is needed. Last season, the Saints offense, which I’m sure most of you will agree was a top 5 unit in 2018, only had one wide receiver with more than 28 total receptions and more than 427 receiving yards. That lone wide receiver was Michael Thomas, who registered 125 total receptions for 1405 yards and 9 touchdowns in 2019. The Saints second-best wide receiver last season was Tre’Quan Smith, a 2018 third-round draft pick. He registered just 28 total receptions in 2018 for 427 yards and 5 touchdowns.

One thing the Saints offense didn’t do a lot of last season was turn the football over as they had just 16 offensive giveaways all last season. By the way, the Saints had the best average ranking of the 15 main statistical categories last season and they finished just barely ahead of the Kansas City Chiefs.

Make no mistake about it, the Steelers are unlikely to have the NFL’s top offense in 2019. Even so, they should have a good enough unit to produce at least a top 10 overall ranking and maybe even as high as top 5. Once again, if the key members of that Steelers offensive unit stay healthy and they cut down the turnovers, the loss of Brown, and Bell, for that matter, can be overcome. Personally, I think McGinest is underrating the Steele offense right now and basing it way too much on the unit losing Brown and Bell this offseason.