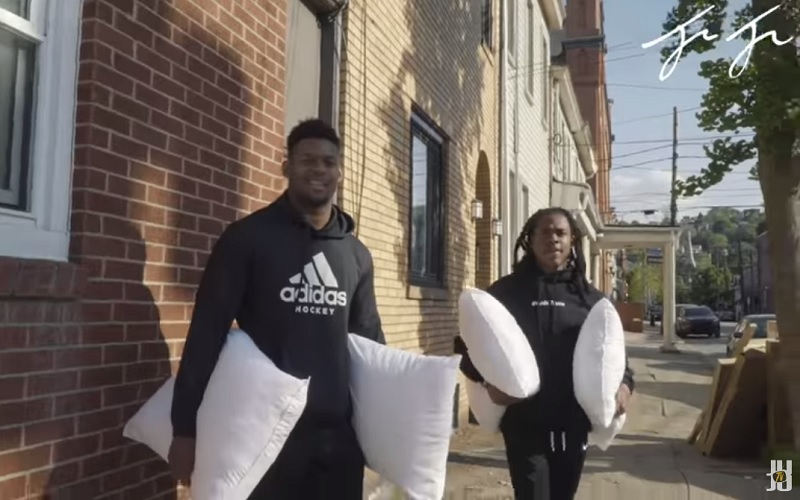 The meteoric rise of Pittsburgh Steelers wide receiver JuJu Smith-Schuster, not only as a player, but as a personality as well, is quite phenomenal. After all, it was just two years ago today that nobody really knew much about him and many were even still upset that the Steelers had drafted him. Nobody saw his selection coming and now he is the Prince of Pittsburgh and one of the NFL’s top wide receivers and yet still just 22 years old.

That youthfulness of Smith-Schuster’s was recently put on display once again in city of Pittsburgh as the Steelers new No. 1 wide receiver took the streets and restaurants of the South Side to conduct pillow fights in the middle of the day with strangers. These playful shenanigans, if you will, were videoed for Smith-Schuster’s always entertaining Youtube channel and you can watch it in its entirety below. At the end of the video, Smith-Schuster can be seen paying for several meals in the restaurants he visited. He also poised for several photos with strangers throughout the sequence.

Remember, this is the same Smith-Schuster who put together an impromptu water balloon fight for the kids of Pittsburgh in Donaldson Park just a few weekends ago and he reportedly spent quite a bit of his own money to make what might become an annual event, happen.

To offer some contrast to Smith-Schusters latest video, I have included the latest Youtube offering from Steelers former wide receiver, Antonio Brown, who is now with the Oakland Raiders. In Brown’s video, he is first shown returning back to Pittsburgh in a private plane. He is shown dressed to the nines on his way to attend traffic court during the video and has several of his highlights from his Steelers career mixed into the video. At a few points in his video, Brown’s shown posing for a few photographs with strangers. Make no mistake, however, most of the video is about him. Brown’s documented second day in pittsburgh includes him taking trips down memory lane as he visits his previous mansion where he lived since 2013

Mind you, there is nothing overly wrong with Brown’s video, but when you watch it after watching Smith-Schuster’s, you can tell just how different both players are and thus see the huge contrast. Make no mistake about it, Brown earned everything he has, but while he may have been Pittsburgh’s Prince several years before Smith-Schuster arrived in the Steel City, he was considered anything and everything but that for the last several months he was with the Steelers.

Pittsburgh is JuJu’s city now and it likely will be for many, many more years to come. Long live Prince JuJu.