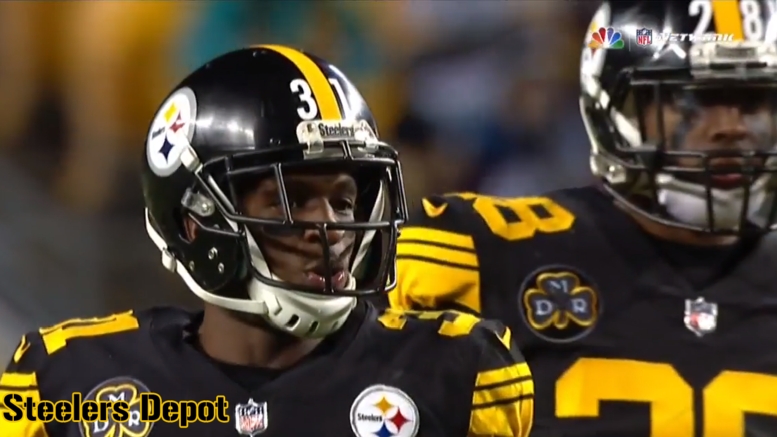 Pittsburgh Steelers free safety Sean Davis is entering his fourth season in the NFL, and fourth with the Steelers. Which, at this point, basically makes him part of the old guard. Among the current projected starters, only Cameron Heyward, Stephon Tuitt, Vince Williams, and Bud Dupree have been with the team longer.

This dawned on him this offseason. He’s one of the established veterans now. Which comes with expanded responsibilities.

“Guys look up to me to help them, teach them stuff and know that Coach is looking to me to do that”, he said during OTAs recently, per Chris Adamski for the Pittsburgh Tribune-Review. “Time is flying — and my role has changed tremendously”.

Well it certainly has changed, on the field. As a rookie, his first role as actually as the slot defender in the nickel defense back in 2016. He served in that capacity for a few games before suffering a shoulder injury. He was shelved for a bit and then reinserted rotationally with Robert Golden at strong safety.

He would rotate with Davis for two games before taking over full-time as the starter. He has started every game since then, but he moved from strong safety to free at the start of last season. That role was more new to him than playing in the slot or at strong safety, both of which he did in college.

While he told Adamski that he considers himself versatile, he also said that he hopes he stays at free safety. And frankly, he might be the only one among those currently likely to make the roster who really profiles as one.

“I want to hone in on free safety and really perfect my craft at that”, he told Adamski. “Having another year at free safety, that’s what I’d really like to do”.

Davis had his growing pains adapting to that new role, inconsistency really being one of the themes of the season in that regard, but he had some highlights as well. But one thing that has been consistent is his presence. He is always there, even playing through injuries.

Though he gets a lot of criticism from the fans, he certainly seems to be well-liked. Ramon Foster predicted that he would have a big year this season, and it’s not unreasonable. A year into a position switch is a plausible time for a relatively young player to break into the role.

And it’s a role he’s come to love. He even told Adamski that the “ideal situation for me, I would like to be in the post — in all subpackages and everything. The failsafe, the last man on defense, all the time”.

While adjusting to that, he has also adjusted to the newfound role of leader, as the longest-tenured member of the secondary at this point (along with Artie Burns and Jordan Dangerfield). Expect him to play a bigger role in that regard than he has previously in his career.