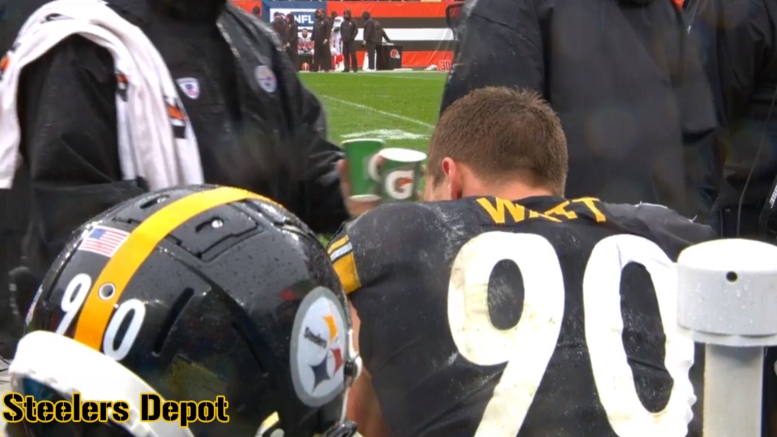 Pro Football Focus recently published a list of the top 25 players under the age of 25 in the NFL right now, a list that included Pittsburgh Steelers wide receiver JuJu Smith-Schuster. He also happened to be the youngest player on the list, the only player under the age of 23, but he was the only one from Pittsburgh to make it.

Another one was close, however, and that would be T.J. Watt, the Steelers’ first-round pick from 2017, the same year they drafted Smith-Schuster in the second round. He made the list of 10 players who just missed out of the top 25 after recording 13 sacks and six forced fumbles in a breakout Pro Bowl season last year.

“Watt 3.0 started the 2018 season with a bang. He racked up 10 sacks, eight hits and 15 hurries from his 289 pass-rushing snaps, but as PFF’s Austin Gayle wrote in December, those numbers were largely thanks to the scheme in which he played as opposed to him repeatedly beating the man in front of him”, his entry reads. It goes on:

“However, from Week 13 on, it was a different story, and he displayed all the traits that make him a fascinating player to watch moving forward. His 85.8 pass-rush grade from Week 13 on tied for fifth among all edge defenders, while his pass-rush win rate of 26.6% over that span paced the league”.

This isn’t just something that Pro Football Focus observed. We talked about it. Watt talked about it himself. He started to put things all together during the second half of last season. While it didn’t translate into an increase in the number of sacks, he was more successful in winning his one-on-one matchups and getting into the pocket.

“As the season went on I definitely feel like I got better, that I caught fire towards the end of the season as a pass rusher, impact player”, he told the team’s website recently. “I wish I would have learned it quicker in the season, but I am happy it happened, I am happy I was able to learn what I was good at, what I could get better at. Then it’s about working on things I know I can get better at, things I can focus on this offseason. I am not satisfied, so I am going to keep working”.

This will be Watt’s only appearance on the list, however, because he will be turning 25 during the course of the 2019 regular season. Not that that really makes a difference whether he is improving at the age of 24 or 25 or 26. As long as he is continuing to get better while playing at a high level, that is the important part.